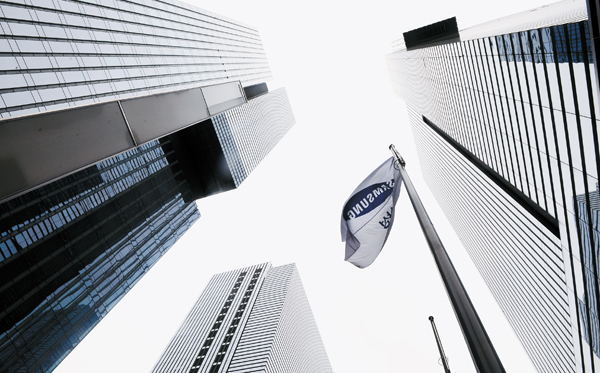 Samsung Group’s flag flutters in the wind at the group’s Seocho headquarters in southern Seoul on Wednesday. All eyes are on whether the group will shake-up its affiliates, Samsung Electronics’ corporate strategy team president Kim Jong-joong said, “We can’t say we will not restructure the group.” [NEWSIS]

The company explained that revenue fell largely due to finished construction projects and seasonal factors that lowered demand for its fashion and resorts businesses.

Most of the losses came from the company’s construction business, with profits tumbling 415 billion won. The company said implementation of a tighter profit-and-loss-management rules for its construction division this year made the losses appear greater

The changed guidelines reflects additional costs incurred for each project immediately as losses while applying profits to the balance sheet later than before.

“Since we also reflected predictable costs already as losses we expect to see improved performance results for the next quarter,” the company said in a statement.

Still, uncertainties lie ahead for the company as this quarter’s plunge in profits was mainly due to unexpected changes and delays in its construction projects taking place in Qatar and Saudi Arabia.