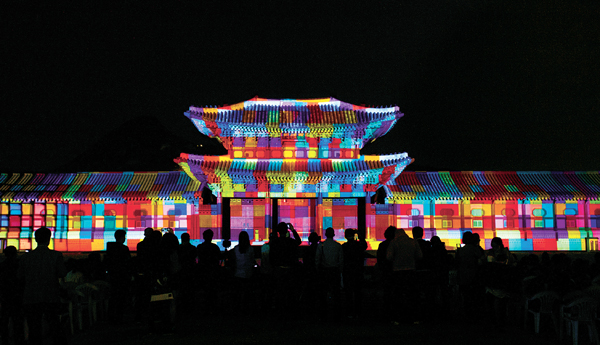 A media facade show is kicking off this year’s Royal Culture Festival at 7:30 p.m. on Friday at Heungnyemun Gate of Gyeongbok Palace in central Seoul. The show will be held twice a day at 9:15 and 9:30 p.m. from Saturday to May 8. Above is last year’s show, displaying colorful lighting across the historic gate. [CULTURAL HERITAGE ADMINISTRATION]

It’s impossible to experience all 518 years of the Joseon Dynasty (1392-1910) in just 10 days, but according to the Cultural Heritage Administration the second Royal Culture Festival that kicks off tomorrow will allow visitors to become immersed in as much of the historic era as possible during its run.

With the media facade show across the Heungnyemun Gate inside Gyeongbok Palace in central Seoul signaling the start of the festival at 7:30 p.m. on Friday, more than 30 programs including concerts, performances, culinary events and art exhibitions on Joseon royal life will be held at five venues: Gyeongbok, Changdeok, Changgyeong and Deoksu palaces and Jongmyo Shrine.

“We categorized the five venues according to their characteristics and planned out programs that fit into the category,” said Son Hyung-chae, co-director of the festival from the Korea Cultural Heritage Foundation.

“Gyeongbok Palace, for example, was the main royal palace of the Joseon Dynasty. Therefore we wanted visitors to ‘Encounter with Kings’ here and planned programs such as ‘The Royal Feast of 1892,’ which is a reenactment of a royal banquet held in 1892 to commemorate both the 30th anniversary of King Gojong’s reign and his 41st birthday.”

“The Royal Feast of 1892” will take place three times starting at 2 p.m. at Geunjeongjeon Hall in Gyeongbok Palace. Another program offered at Gyeongbok Palace is the “Nighttime Concerts at Gyeongheoru Pavilion,” which are live concerts in the open air under the moonlight. The concerts will be held at 8 p.m. from Saturday to May 7, featuring various music groups including the National Gugak Center, the Seoul Philharmonic Orchestra and the National Orchestra of Korea. 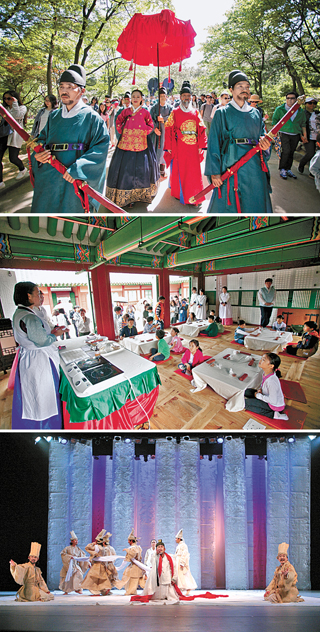 From top: “Time Travel to 1750,” where visitors can enact a scene from the life of King Yeongjo, will be held May 5 at Gyeongbok Palace; the “Royal Kitchen Experience” will give visitors a taste of royal cuisine at Sojubang Kitchen at Gyeongbok Palace; and an educational theatrical drama titled “King Injo at the End of the Road” will start at 7:30 p.m. from May 5 to 7 at Munjeongjeon Hall at Changdeok Palace. [CULTURAL HERITAGE ADMINISTRATION]

Although the program is already fully booked, Gyeongbok Palace is also offering a Royal Culture Experience where families can spend a night at the palace, experiencing a diverse range of royal culture without electricity, cell phones or TV.

“We announced on our website looking for families of at least three generations who would be interested in spending a night at Gyeongbok Palace’s Hamhwadang Hall and Jipgyeongdang Hall,” said Yeo Sung-hee, an official from CHA. “More than 100 families submitted applications and 13 families have been selected.”

The idea of opening up the doors of royal palaces to be used as high-end guesthouses has been embroiled in controversy, with preservationists insisting it would expose historic sites to risk of damage. However, the overnight experience, according to Yeo, will not involve making any changes to the rooms, which will be heated using traditional methods.

Other programs at Gyeongbok Palace include the “Royal Kitchen Experience”; royal court performances by groups from Thailand, Japan and Vietnam; an exhibition of the prize-winning photographs from last month’s hanbok (traditional clothing) photo contest; “King’s Calligraphy on the Signboards of Palace Halls,” which is an exhibition of 10 signboards inscribed with the handwriting of nine Joseon kings; the “Royal Custom Fashion Show”; and “Experience of Royal Female Culture,” an exhibition on royal women’s culture such as traditional makeup made using Korean medicinal ingredients.

According to Son, Changdeok Palace is known for its beautiful natural setting. Therefore, the festival has chosen the theme of “Encounter with Nature” for this palace.

The programs being offered here include traditional performances at night in the rear garden of the palace; the “Exhibition of Royal Poets and Palace Photos”; the “Experience of Naeuiwon Royal Pharmacy,” featuring Joseon-era medical practitioners dressed in traditional physician costumes to give visitors the chance to experience medical services of the Joseon royal court at the palace’s Seongjeonggak Hall; a botanical walking tour based on “Donggwoldo,” or “Painting of the Eastern Palace,” that involves viewing special trees and learning the stories associated with them; “Reenactment of the Everyday Life of King Yeongjo,” featuring various dramatic episodes related to King Yeongjo (1694-1776); “Outdoor Historical Drama,” a historical theatrical drama that offers a novel interpretation of King Injo (1595-1649) and his rise to power by dethroning Prince Gwanghae (1575-1641) in a coup; and many more.

Meanwhile, Deoksu Palace is where visitors can encounter modernity, says Son. Here, visitors can check out contemporary art exhibitions that are on display in the historical space of Deoksu Palace and various classical concerts being held in front of Seokjojeon Hall throughout the festival.

At Jongmyo Shrine, the “Encounter with Ritual” portion of the event will let visitors witness various ceremonies including the royal ancestral ritual on Sunday from 10 a.m. to 4:30 p.m. The ancestral ritual will be accompanied by royal music and dance. The Myohyeollye ritual, which is performed in the form of a visit to royal ancestors by a crown princess after her marriage, will also be held from May 5 to 7 starting at 2 p.m. at Jongmyo Shrine.

“We’ve decided to halve the ticket prices to the palaces during the festival to offer everyone a chance to enjoy the royal lifestyle of the Joseon Dynasty,” said Yeo. “With an entrance ticket, most programs can be enjoyed for free.”

For more information about the program, visit www.royalculturefestival.org.