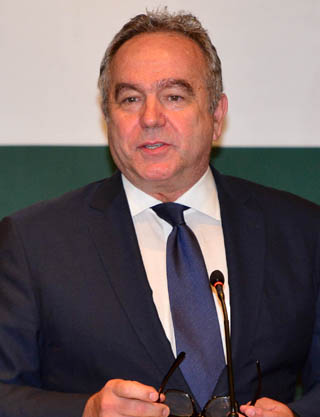 It may take several American presidents to truly turn Washington back toward Asia again, according to Kurt Campbell, the former U.S. assistant secretary of state for East Asian and Pacific affairs.

“For us to be truly back in Asia, after a period of profound reorientation and distraction, will take several presidencies and a sustained commitment between both parties,” said Campbell, the chairman and CEO of The Asia Group, headquartered in Washington, at the dinner reception of the Asan Plenum in Seoul at the Grand Hyatt Hotel on Tuesday.

Campbell, who is often considered the architect of U.S. President Barack Obama’s “pivot to Asia,” which focuses on improving political ties and trade relations with the region, said, “The basis of our engagement in Asia should be the strong alliance system.”

He continued, “The model here is the extraordinarily diverse and strong relationship between the United States and South Korea. I know of no other bilateral relationship in the world that has been more effectively tended to on both sides.”

Campbell said that those who argue that Washington never left Asia in the first place are “mistaken,” pointing out that the United States has a “very unbalanced foreign policy,” in which the primary focus and interest has been in the Middle East and Southeast Asia. He pointed out that 50 percent of the State Department budget is still focused on Europe.

“During a period when, going forward, everyone recognizes deep down that the history of the 21st century is going to be written in Asia,” he said, “the United States has to find the will, the wisdom, the cunning, to somehow find more time and attention for the Asia-Pacific at a time when the demands in the Middle East and Southeast Asia are not in any way diminishing.”

He added, “I think the biggest challenge is that now that we have raised the stakes in Asia, now that we have made a substantial commitment to rebalance, or pivot, will we be able to follow through.”

This includes contemplating whether Washington will be able to sustain its engagement and role in Asia in a way that is essential for the maintenance of peace, security and stability in the region, he said.

On North Korea’s increasing nuclear and missile provocations, Campbell said, “it would be incumbent on the part of the United States to consider greater pressure.”

He also said that further sanctions, or actions against North Korea’s financial institutions in China, were among the actions that “would send a much clearer message” to Pyongyang regarding its attempts at military development, pointing out that there are “many countries that are much more heavily sanctioned than North Korea.”

Campbell also said he supports five-party talks between South Korea, China, Japan, Russia and the United States in order to discuss recent events, noting that China is increasingly concerned by the regime’s actions and occasionally hints that it would support such talks.

“I’m struck by the fact that, in every corner of the world, China is gaining influence and power,” he observed. “And you see that in every country in Asia expect one. And that’s North Korea.”

Campbell said on defense strategy that the next 15 or 20 years will draw more attention toward investment and expeditionary capabilities, such as naval and air assets.

On working for former Secretary of State Hillary Clinton, Campbell said he has never worked with anyone whose sense of purpose with regard to the Asia-Pacific region was so clear, and that if she is elected, “America’s engagement in Asia will be as strong as ever.”

If he was in charge of U.S. foreign policy, he said, he would call for an annual report or effort by the White House or the National Security Council that would quantify the success and progress of the pivot to Asia “across the board.”