‘Hillary Clinton will tackle Korean issues from day one’

‘Hillary Clinton will tackle Korean issues from day one’ 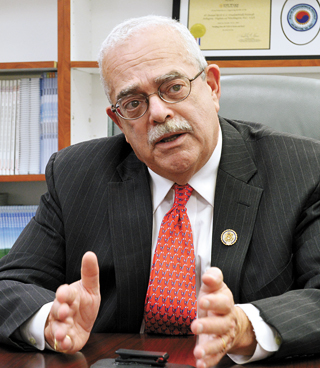 Rep. Gerry Connolly of Virginia, co-chair of the Congressional Caucus on Korea, is confident that if former Secretary of State Hillary Clinton is elected to the office of U.S. president, she will be able to handle the North Korea issue right off the bat.

Connolly, a four-term Democratic member of the U.S. House of Representatives, sat for an interview with the JoongAng Ilbo in Washington on April 22. Connolly has ample experience when it comes to Korean issues through his work on the Foreign Affairs Committee. Also, Virginia’s 11th district, which he represents, includes Fairfax County, enabling him to closely cooperate with the sizeable Korean-American community residing there.

Q. Why is Hillary Clinton qualified to be the next president?

A. She was the longest-serving first lady at the governor’s mansion in Arkansas and, of course, she was the first lady at the White House for eight years. She won two terms in the U.S. senate, then served four years as the secretary of state. Very rarely in American history have we had anyone running for presidency as qualified as that. So this is a highly experienced individual who can bring all that to the service of our country and can sort of “hit the ground running” from day one.

Some people criticize her for accepting high speaking fees.

Well, I think it’s kind of a double standard. I don’t remember Republicans criticizing Ronald Reagan when he left White House and one of first things he did was go to Japan and collect a $1 million speaking fee. Look at Henry Kissinger, he’s made a lot of money by public speaking. Why only apply this to her? If it’s wrong, then it’s wrong for everyone. If it’s not wrong for them, it’s not wrong for her.

What influence will Clinton have on the South Korea-U.S. alliance?

In this complex world we’re living in, having an experienced hand come into the White House is a huge advantage. Clinton, as secretary of state, dealt with a lot of issues, and she is intimately familiar with the issues involving North Korea, economic relations between the United States and South Korea, Chinese involvement in nuclear issues in the North and famine issues in North Korea. And she knows the leaders. She’s met them all. She knows the players, and they know her. That’s a huge advantage, because a lot of diplomacy comes down to personal chemistry.

And if Trump becomes president?

Well, I think a lot of us will be moving to Korea. One would hope that the alliance will remain strong. The learning curve for Mr. Trump will be quite steep, unlike for Ms. Clinton. And one has reason to be concerned that mistakes could be made and misinformation can be compounded by virtue of the fact that he has no experience on Korean issues or the Korean Peninsula, or knowledge of what’s happening in the North, concerns that South Korea obviously legitimately has. So will things blow up if he gets elected? No, but we’re all going to have to hold on and hope for the best and make sure he learns a lot real fast.

The Korean-American community is concerned about Trump saying he will pull out U.S. troops from South Korea if he is elected president.

Well, that’s one of the issues I’m talking about in terms of that learning curve. I don’t believe any president will act so recklessly. And I think he would learn that those troops are there for a reason.

So, Korean-American voters should support Clinton?

The Korean-American community here is very diverse, lots of small businesses that need healthcare and loans to help them expand or get started. And I think Clinton is going to be the big champion for small minority businesses. Across the board, she wants to create opportunities. She represents a very welcoming America to new immigrants and to those who have already been here for a while. She values diversity and sees it as real asset for America. And, I think, that’s a key difference between her and her Republican opponents. Neither [Ted] Cruz nor Trump has presented any kind of inclusive message to ethnic communities across America. New immigrants and older, more established ethnic communities have reason to be concerned by the anti-immigrant postures both Cruz and Trump have taken.

You have a lot of contact with Korean issues and Korean organizations.

I’ve been in public life for 22 years on the local board, government and now in Congress. I have been very active with various Korean associations, and I worked a lot with Korean communities on zoning and planning issues for houses of worship and businesses. In Congress, I co-chair the Korea Caucus, so I deal with a lot of Korea-based issues involving the North and the South. I was a big champion of the FTA [free trade agreement] with South Korea, and I’m quite outspoken on human rights violations in the North and their nuclear program. And I was just in China, and I certainly talked to officials there on the need for China to get engaged in trying to curtail the threatening behavior of the North. And I think China increasingly shares our frustrations.

What do think about the large Korean community in Virginia?

My office is in Annandale, so I’m in the middle of the Korean-American business community of Fairfax County. And we encourage more integration by the Korean community, too. I’ve been very active in encouraging Korean candidates. I was one of first people to support Mark Keam [a member of the Virginia House of Delegates]. I’m very proud of the fact that I’ve supported all of the Korean officials to be elected in the state of Virginia.