As smog worsens, Koreans pay for a breath of fresh air

As smog worsens, Koreans pay for a breath of fresh air 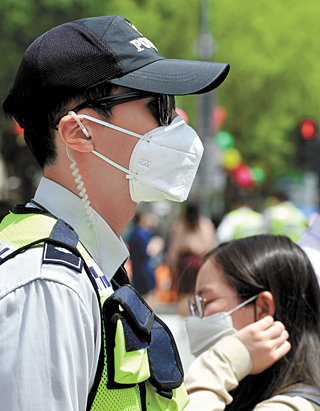 The sale of masks that protect against fine dust particles quadrupled last week compared to the same time last year, according to the online shopping mall Auction, which is owned by eBay Korea.

Other merchandise related to air purification, such as air-purifying plants like lady palms and areca palms, sold for 4.2 times more while the sale of air purifiers jumped 2.3 times, and that of antiseptic mouthwash rose 2.4 times. Also, air purifiers, masks and wet tissues are included in the top-20 products sold by another online shopping mall called 11st.

The sale increase in such protective goods is not surprising, given that on Sunday, the Air Quality Index in Seoul hit 151 micrograms of fine dust particles per cube meter, a “Very Unhealthy” level according to the Seoul city government’s air quality standards. Fine dust particles are defined as particulate matter with a diameter of less than 10 micrometers (one micrometer equals one-thousandth of one millimeter). Causes for the recent increase include excessive vehicle emissions and yellow-dust from China.

The Seoul city government raises a fine-dust alert in the city when the air contains more than 90 micrograms of fine dust particles per cube meter for more than two hours. Members of sensitive groups are advised to stay indoors and residents-at-large are advised against prolonged outdoor activities.

Park Yeong-joon, a regular biker who had to cancel his bike training last Sunday due to poor air quality, said, “As a working man, I look forward to the weekend when I can play sports and exercise.”

Park is the president of Triathlon Club 10-under. He had scheduled a 70-kilometer (43-mile) training session on Sunday near Seoul Grand Park in Gwacheon, Gyeonggi.

“This is the first time I had to cancel the bike training because of fine dust particles,” he said.

Seoul Grand Park saw a dip in its visitor count last weekend due to the poor air quality.

“We had an average of 14,000 visitors per day last weekend,” said an employee of the park. “Normally we have some 50,000 visitors during sunny weekends.”

For parents and others with young children, it’s becoming a habit to check the Air Quality Index before going anywhere.

“It is mandatory to check the Air Quality Index before going outside with the kids,” said Kim Bo-eun, who works at a nursery. “Every April, we always take the children out to the playground or to the mountains to observe nature. But we rarely went outside this year.”

Unsurprisingly, more parents are finding alternative forms of entertainment for their children. Toddler theme parks franchises known as “kids’ cafes,” such as the Pororo Park or Hello Kitty Town, abound in Korea, where parents can enjoy a good book or coffee while watching their kids play.

“We make 50 percent more profits on days when the air quality is bad,” said a worker, surnamed Kim, at Popote Kids Cafe in Jangji-dong, southeastern Seoul.

But the choice to stay indoors is not offered to everyone.

“When I have to work outdoors, I get worried,” said a parking attendant at Hyundai Department Store in Gireum-dong, northern Seoul. “I can’t wear masks all the time, because I’m working in the service sector.”

“It doesn’t matter if the air quality is bad,” said a 63-year-old Korea Yakult vendor surnamed Oh. “In order to make money, I have to go outside.”

The Seoul Metropolitan Government estimates that around 20 percent of the fine dust particles in the country are created within the capital city area. The city government is discussing policy measures to decrease the number of old diesel vehicles with the governments of Gyeonggi, Incheon and the Ministry of Environment.

“The fine dust particles are a serious problem for the country,” said President Park Geun-hye in her address to senior journalists Tuesday. “We should start by providing forecasts on air quality that are as accurate as possible in order to help the citizens protect their health.”