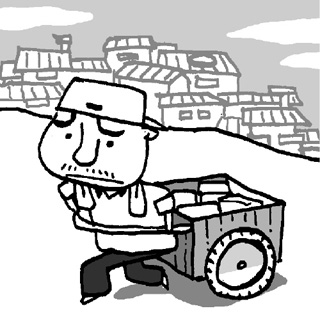 There are lots of preconceptions about poverty. On the right, a common idea is that poor people mainly have their own behavior to blame — that if they worked more, committed less crime, had fewer out-of-wedlock births and did fewer drugs, the poverty rate would plummet. Meanwhile, many liberals blame poverty on free-market policies that have weakened unions and eliminated the corporate-welfare state.
Both of these stories sound plausible, and both may be important factors. But when I look at Japan, I see plenty of evidence that neither individual behavior nor free-market policy is the main reason for poverty. As in so many areas of economics, Japan confounds our conventional wisdom.

The stereotype of Japan as a low-poverty country isn’t accurate. It’s true that Japan had relatively few poor people — and was a very equal society — as recently as the early 1980s. But since then, the national poverty rate has risen relentlessly.

Now, a new Unicef report informs us that on at least one key measure, child poverty, Japan has fallen behind the United States. The report looked at the gap between the income of the poorest Japanese families with children and the average household income. On this measure, Japan now ranks 34th out of 41 developed countries (a higher rank indicates more child poverty). In comparison, the U.S. ranks 30th.

This rising poverty level fits with all the other negative economic trends coming out of Japan — falling real wages, rising inequality and the rise of low-paid non-regular employment. It all adds up to one big truth: lots of people in Japan are not doing well economically.
The question is, why is this happening? If the bad-behavior explanation for poverty is correct, we would expect to see high crimes rates, a lot of unemployment and high rates of things like out-of-wedlock births and illegal drug use.

But we see none of those things. Japan has very high labor force participation and low unemployment. No laziness or idleness here. Japan’s crime rates, especially for violent offenses, are legendarily low, and have been falling even more in recent years. Single parenthood is very rare in Japan — only about 3 percent nationwide, compared with about 25 percent in the United States. And rates of illegal drug use, while they have risen recently, are much lower than in the U.S.

So Japanese people are much better behaved than Americans, at least in the ways that conservatives use to account for poverty. How about free-market policies? Here the story is more ambiguous, but I still see this as a minor factor at most.

Japan is famous for its corporate-welfare system, where job security is high and raises are based on seniority. This system has declined in the years since the administration of former Prime Minister Junichiro Koizumi ended a ban on the use of non-regular workers in manufacturing. But much of the shift to low-paid, insecure jobs has happened without major changes in policy. In particular, stringent government protections of regular workers have been kept in place.

Japan has also resisted becoming more open to trade and immigration. It ranks lower than most rich countries on measures of trade openness, and is famously resistant to importing foreign labor.

What about unions? Labor union membership has declined steadily since the 1970s, much as it has in other rich countries. But this probably hasn’t been driven by policy — there have been no major changes in Japanese law regarding unions, and labor disputes are exceedingly rare. Japan’s labor-management relations, in fact, have always been far less confrontational than in the United States.
So if neither free-market policy nor individual behavior is responsible for Japan’s steadily climbing poverty rate, what is the cause? One possibility is low productivity. Labor productivity has fallen along with wages, and total factor productivity (which takes capital into account as well as labor) has stagnated.

Another possibility is the impact of trade competition. Even though Japan has remained more protectionist than most rich countries, protection of domestic markets is no guarantee of success in international ones. Japan’s exporters have come under increasing competition from Asian rivals, and from innovative American companies, in areas such as electronics, machinery and cars. More direct competition from nations that make similar goods means smaller gains from trade, so Japanese workers could be feeling the pinch despite the government’s protecting hand. This might also explain why Japan’s rich, like their counterparts in other countries, have been seeing continued income gains even as the poor get poorer.

But these reasons are speculative on my part. What’s clear is that Japan defies our usual stories for the causes of poverty, especially regarding the increase in the percentage of poor people since the 1980s. That means that many of the poverty solutions being suggested on both the right and the left might be of dubious efficacy.


*The author is an assistant professor of finance at Stony Brook University.