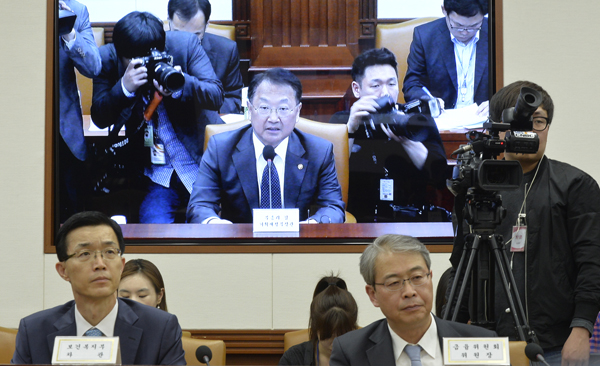 Minister of Strategy and Finance Yoo Il-ho, center, who doubles as deputy prime minister for the economy, delivers a speech during an economic ministers meeting at the government complex in downtown Seoul on Thursday. [KIM HYUN-DONG]

The government unveiled a series of measures including tax benefits to encourage the private sector to make more aggressive investments in new technologies and even new industries, and for companies to restructure themselves to regain competitiveness.

According to the Ministry of Strategy and Finance, a tax credit of up to 30 percent will be offered to companies of any size that invest in new technologies or industries. These new areas will include the Internet of Things, new energy businesses, smart cars, artificial intelligence, fintech and bio-related fields.

Previously, tax credits for small and midsize companies investing in research and development amounted to 30 percent, whereas larger companies including conglomerates were offered tax credits of 20 percent.

The tax credit rate will be determined based on how much the companies are spending on research and development as a proportion of their annual revenue.

The ministry said it decided to raise tax credits offered to conglomerates because most of the investments in new technologies have come from bigger companies, and tax benefits should go where the actual investments are made.

The government has been criticized for a lack of such benefits, as well as excessive regulations on conglomerates, which have resulted in major companies cutting back on research and development spending, especially since 2013, just as Korea’s current manufacturing-based economic structure hit a wall and exports fell continuously.

“Despite our best efforts to revitalize the economy in the first quarter, we came up with disappointing results,” said Yoo Il-ho, the finance minister and deputy prime minister for the economy, during an economic ministers meeting at the government complex in downtown Seoul on Thursday.

“Although we have prevented the economy from falling, it grew 0.4 percent due to stagnant exports and investment, and weakened consumer spending,” Yoo said. “Particularly, the lack of investment in facilities and research and development could become negative factors working against finding future growth engines.”

The government will also provide higher tax credits when companies invest in facilities such as production lines that manufacture products involving new technologies or from new industries.

Conglomerates will get a tax credit of 7 percent, while small and midsize companies will get 10 percent for such investments. They get an additional 75 percent tax credit when they increase their hiring for new businesses or in services. This is up from the previous 50 percent.

Technology isn’t the only field that is getting government support.

For the first time, the government is providing tax credits for cultural content like movies and TV shows. Small and midsize companies in the field will get a maximum 10 percent tax credit on production costs, while for conglomerates, the rate is 7 percent.

The government has not categorized areas that it considers new technologies or new industries, but said it will decide on around 10 areas by June and include them in the revised tax bill by July.

The government also said it will create a fund equivalent to 1 trillion won ($880 million) that will be used for investing in new industries. Half of the fund will be provided by the government and public institutions, while the remaining half will be covered by the private sector.

The ministry said the fund will be invested in areas where risks are high, as are potential returns. It added that the government will be covering losses when investments fail, whereas it will be the last to get profits when they succeed.

State-run financial companies will also increase their support for such new growth areas as ICT convergence and cultural content.

In order to speed up and increase the number of companies that voluntarily restructure, the government announced it would raise its support, including taxes. Additionally, it will strengthen credit risk evaluation starting this year. The conglomerates’ evaluation that started this month will end in July, while those of small companies will start in July and end in October.

“We need to cut out the rotting flesh of our economy through swift and bold corporate restructuring, and this is something that we can no longer delay or avoid,” Finance Minister Yoo said.