Pulling back the curtain on life in Pyongyang

Pulling back the curtain on life in Pyongyang 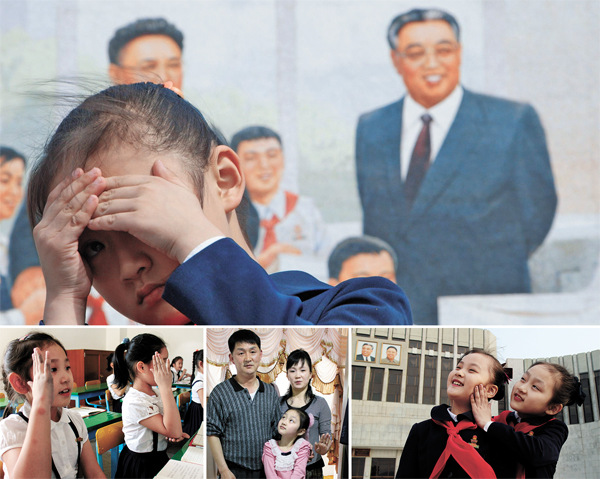 The just-released documentary “Under the Sun” exposes the reality behind North Korea’s propaganda efforts. The film follows the staged life of an 8-year-old girl named Zin-mi (top) and her parents (above center). [Nal-Gae Entertainment]

Daily life in Pyongyang, the most secretive city on earth, remains highly mysterious to this day.

The international community, including those in South Korea, is aware that North Korea is suffering from extreme poverty, based on the testimony of numerous defectors and discreet photos by foreign journalists.

But still, few details have been revealed about how North Koreans spend their everyday lives and what they actually feel about living in such a restrictive environment.

Are they really happy being disconnected from rest of the world? Do they really want those photos of their past leaders - Kim Jong-il and Kim Il Sung - hanging up in their living rooms?

The documentary “Under the Sun” from acclaimed Russian director Vitaly Mansky gives a rare glimpse into this mysterious place in a way that has never been attempted before. The film opened nationwide Wednesday, its first wide release.

Staying in the North Korean capital for one year with official approval as well as funding from its government, Mansky delved deeply into the dismal lives of Pyongyang residents by spotlighting the life of an 8-year-old girl named Zin-mi and her parents.

However, he couldn’t show the world what he saw and felt because during his year-long stay in Pyongyang, he and his crew were constantly kept under guard by government officials.

He also had to submit everything he filmed to be censored on a daily basis. If his video included something that went against the government’s preferences, it would be confiscated.

“I wasn’t able to film a single thing that I intended in the first place,” the Russian director said at a press conference in Seoul on Tuesday.

“[It was] because 100 percent of this documentary was filmed under the control of the North Korean government. Never in my life have I worked under such conditions.” 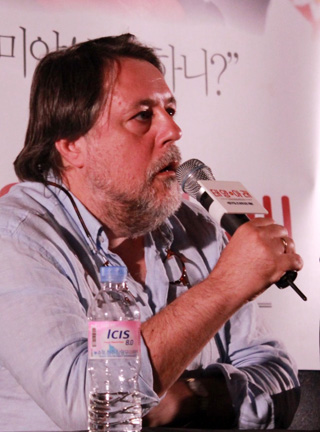 His film follows an 8-year-old girl named Zin-mi who gets admitted to a prestigious children’s scout team which is preparing for a celebratory ritual for the upcoming birthday of Kim Jong-il.

The 92-minute documentary starts by showing the simple characteristics of the city such as a group of people doing morning exercise at a park and another group going to work dressed in monotone coats.

But it doesn’t take long for the audience to realize that the people on the street are moving based on the commands of an unknown man outside the camera frame.

Zin-mi and her classmate clean their classroom while loudly chanting a song about worshipping their leaders.

At dinner time, Zin-mi’s father mechanically recites the nutritional value of kimchi. Every conversation and gesture seems extremely awkward. But this is North Korea, where anything could be ordinary.

Then the secret is revealed. The unknown man - seemingly someone from the government - appears in front of the camera, directing the father to repeat his line again while telling Zin-mi to smile more while describing the positive aspects of a traditional dish.

This isn’t how a documentary should be made, but it does show how a propaganda film is made.

When Mansky realized that he wouldn’t be able to film his documentary the way he wanted, he quickly changed his plans to let the inspectors intervene in the scenes, but decided to keep his camera rolling the whole time.

How the communist regime wants the country to be perceived by the world and what they are trying hide are shamelessly portrayed in the movie, almost to the point of seeming comical.

One of the scenes shows the workplaces of Zin-mi’s parents, which are also staged.

The subtitles reveals that when Mansky met Zin-mi for the first time in auditions, she said her father was a journalist, but when the filming began, his job was changed to an engineer at a sewing factory. Her mother also appeared as a worker at a soy milk factory, which obviously wasn’t what she does for a living.

The inspectors appear yet again, telling the factory workers to say this and that, which is mostly about how productive their factory is.

“The whole time I was there, I felt like my life and those of my crew were at stake.”

“The most shocking thing I realized in North Korea was that there is no human-like response at all,” Mansky said. “The lies and the directed scenarios were the reality for them.”

His impressions of the country are in line with what many North Korean defectors have said about the country.

He said that the only sequence he was able to film freely, without surveillance, was the view from the window of his hotel room and an interview with Zin-mi near the end.

In the scene, Zin-mi is asked what she wants to do in the future. Zin-mi cannot answer. It seems that she doesn’t even understand the question.

She is then asked to talk about happy moments of her life. She looks baffled again. The director then asks if she has a favorite poem. After looking a bit confused, she automatically repeats the memorized chants about the great Kim Il Sung, before she quietly breaks into tears. She doesn’t explain why she is crying.

The film ends with Zin-mi and her parents walking patriotically towards gigantic statues of Kim Jong-il and Kim Il Sung to pay tribute by laying flowers at their feet. They are followed by hundreds of other supposed factory workers, who pour into the frame to pile up hundreds of flowers.

As the final credits roll, people re-appear, this time with a trash bin to dump the flowers into.

“A lot of people I know believe that North Koreans are happy in their own ways, especially in Western countries,” Mansky said. “And I think that is because all they’ve seen is a fabricated production. I thought I should unveil what North Korea is really like for real.”

However, the film faced consequences for not following the original plan. North Korea banned Mansky’s film from being screened there. Russia also agreed to not release the film domestically.

“I cannot get in contact with Zin-mi nor her parents afterwards,” the director said. “I hope she will not face consequences for this film and I believe that the media spreading the word about this film can do that partially.”