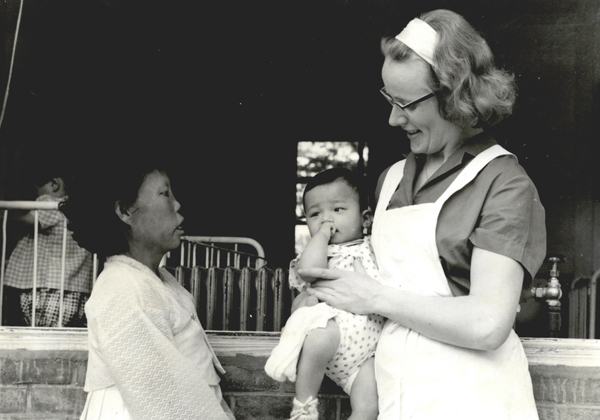 Marianne Stoeger, when she was young, looks after the families of Hansen’s disease patients. [SOROKDO NATIONAL HOSPITAL]

An Austrian nun, who tended to Korean sufferers of Hansen’s disease, better known as leprosy, for more than 40 years, returned for a visit for the first time in 11 years.

“It’s good to be back on this beautiful island,” Stoeger said. “The place has changed a lot since I left.”

Although her Korean was rusty, Stoeger spoke in Korean from the start of the interview until the end.

In 1962, Stoeger came to Sorok Island upon the request of the Archdiocese of Gwangju and the diocese of Innsbruck, Austria, where she studied nursing. She was 28 and planned to stay for five years. She didn’t leave until 2005, 43 years later.

“I don’t think my work was special,” Stoeger said. “I was just very happy when I saw a patient’s family greeting the patients after they were cured.” 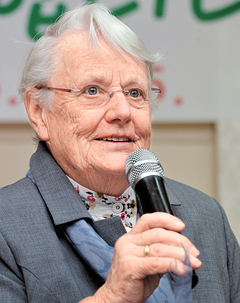 Many people shunned and pointed fingers at Hansen’s disease patients, as the highly infectious disease causes obtrusive skin irritations. Stoeger, however, approached the patients with a smile, pressed their pus and sterilized their wounds with her bare hands.

It didn’t take long before Stoeger became close friends with the patients and local residents. She learned the local dialect and cooked doenjang jjigae, a fermented soybean paste soup. As she aged, she picked up the nickname “Grandma Marianne.”

“I had a good time with the people on Sorok Island, regardless of whether they were patients or workers from the hospital,” Stoeger said. “We were all friends, and we remain close friends.”

In November 2005, Stoeger abruptly left her friends behind. She didn’t tell colleagues or patients she was leaving. She wrote the diocese saying it was difficult for her to move freely due to her age. She had undergone three surgeries to treat her colorectal cancer and was unsure of her health.

“I cried a lot because I was leaving without notifying my friends,” Stoeger recalled. “I felt better after I explained to them why I left through phone calls and letters.”

Although she ended up back in Austria, her heart was still on Sorok Island. According to Stoeger, she spent more than an hour on the telephone every weekend talking with the director of the nurses at Sorokdo National Hospital, who was a close friend of her’s, asking how the people on the island were doing.

After receiving an invitation from the Sorokdo Catholic Church for the 100th anniversary of the national hospital, Stoeger arrived in Korea on April 13. Upon landing on Sorok Island, her asthma miraculously disappeared. Stoeger admits she missed the place terribly.

Stoeger will be heading back to Austria in May.

This was the first press interview Stoeger had ever done. She refused interviews in the past because she did not see her work as significant. However, Goheung County announced that it would nominate Stoeger for the Nobel Peace Prize. A documentary about Stoeger’s life is being planned by the church.

“I came all the way to Sorok Island because of Jesus’ call,” Stoeger said at the conclusion of the interview. “I had a wonderful time for 43 years on the island, and I truly was happy.”