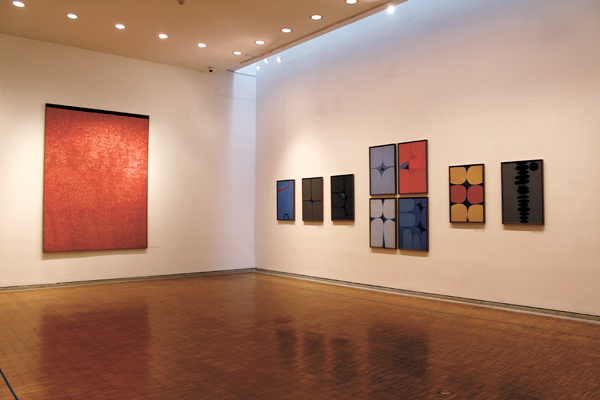 Abstract paintings created by the renowned Korean artist Kim Whanki (1913~74) are now on display at Whanki Museum in central Seoul, as part of his retrospective “The Man Is Gone and the Art Has Remained.” [MOON SO-YOUNG]

The large-scale retrospective of the modern Korean master Kim Whanki (1913~74), being held at Whanki Museum in central Seoul, starts with a black-and-white photo that captured the artist and his wife, Kim Hyang-an (1916~2004), running on a Paris street in 1957. The title of the exhibition, “The Man Is Gone and the Art Has Remained,” is taken from the title of Hyang-an’s 1989 memoirs, suggesting that the show is about not only the artist, but also his wife.

“The exhibition intends to celebrate the 100th birthday of Ms. Kim, the founder of this museum, who was not only the wife but also the most important artistic friend and advisor to the artist,” said Park Mee-jung, director of the museum, said in an interview with the Korea JoongAng Daily last month.

The show features 400 pieces of paintings, drawings and collages by Kim, instead of writings by Hyang-an or materials related with her.

“We are planning an exhibition of such documents and artifacts in the second half of this year,” Park explained. “In the first half, we present works by the artist in harmony in the architectural spaces of Whanki Museum, designed by architect Woo Kyu-seung. Ms. Kim wanted the artist’s works to breathe within the spaces as his avatars, not as objects on display.” 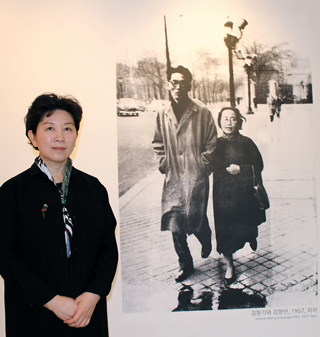 Whanki Museum director Park Mee-jung stands with the 1957 photo that captured artist Kim Whanki and his wife, Kim Hyang-an, on a Paris street. The photo functions as the prologue for the museum’s ongoing exhibition. [MOON SO-YOUNG]

As Hyang-an wished, Kim’s so-called dot paintings, created in the New York period (1963-74), which are the large-scale abstract paintings filled with tens of thousands of round dots and surrounded by layers of square borders, bring about a sublime, cosmic feeling, contrasted by the understated walls of the museum.

“Ms. Kim set up the non-profit Whanki Foundation in 1978 at her own expenses and opened the museum - her long-cherished wish - in 1992,” Park said. “The foundation was set not only to manage Kim Whanki’s art but also to support Korean and foreign young artists. Ms. Kim was pioneering like that.”

Among the exhibits are a lot of abstract drawings and oil paintings on newspapers that show the artist’s continued experimentation and transition into pure abstract figuration. The result was Kim’s collection of dot paintings, which are now celebrated both by art critics and collectors.

Market observers say Hyang-an’s systematic archiving and management of the artist’s works through the foundation contributed to the phenomena.

“Our foundation has been working on a catalogue raisonne [a comprehensive, annotated listing of an artist’s works in total] over the past decade,” Park said.

“But it is more difficult in Korea, as collectors are reluctant to unveil the works due to Korea’s prevalent prejudice that wealthy people often make use of art collections for tax evasion. Still, we are working on it and we will be able to publish the first volume later this year or next year.”