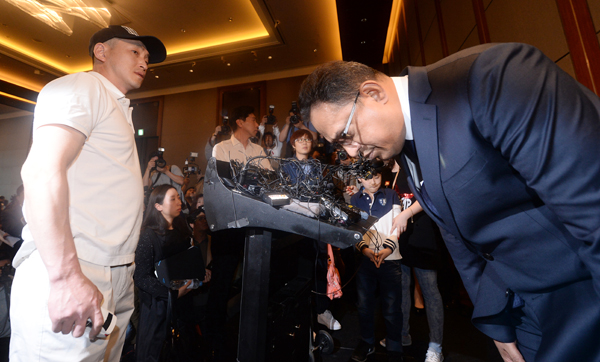 Ata Safdar, the CEO of Reckitt Benckiser Korea, apologizes to those who fell victim to the company’s poisonous Oxy humidifier sterilizers, at a press conference at the Conrad Hotel in western Seoul on Monday. [NEWSIS]

Reckitt Benckiser Korea apologized for the poisonous humidifier sterilizer it sold from 2001 to 2011 and vowed to provide “comprehensive compensation” for victims, although it didn’t give specifics.

“On behalf of Oxy Reckitt Benckiser, I’d like to offer a sincere apology to all victims and their families who have suffered lung disease as a result of using our humidifier sterilizers,” Ata Safdar, CEO of Reckitt Benckiser Korea, the Korean unit of a U.K.-based multinational manufacturer, told reporters at a hotel in western Seoul on Monday. He also apologized for the delay in tackling the matter.

No one from headquarters in England showed up for the hurriedly arranged conference, which the media was invited to less than 24 hours prior. Safdar, who has headed the company’s Korean and Japanese units since April 2014, stressed that this “is the first time we are accepting responsibility, and we are offering a complete and full apology.”

By July, the company will establish an independent panel of experts to decide the criteria and scale of compensation. Compensation will only be given to customers who died from using the product or are classified as first- and second-degree patients by the Korean government. That excludes third- and fourth-degree victims. Compensation will only be given to people who used Oxy sterilizers, the CEO noted, not the other brands that also proved harmful to health.

Safdar refused to offer further details such as the amount of compensation it is considering or who will be named to its panel of experts.

Less than 10 minutes into the conference, a group of sterilizer victims and victims’ families broke into the venue and screamed abuses at the Reckitt Benckiser Korea CEO and executives, temporarily suspending the event.

“Who are you apologizing to?” one protester shouted. “How are you going to bring my dead baby back to life?”

Heated competition among cameramen to film the melee led to brawls.

A mother brought along her preschool son wearing a respirator in a wheelchair. Another held up a photo of a baby killed by the humidifier sterilizer. One of the protesters said he made more than 100 phone calls to Reckitt Benckiser Korea and not a single one was returned, blaming the company for evading contact with victims. He said he learned about the press conference from a newspaper on Sunday and wanted to talk to someone from the company’s headquarters, not someone who will “flee Korea in two to three years.”

Safdar said that he will not leave Korea until all issues are cleared up.

After the press conference ended, Choi Seung-woon, who leads a group of humidifier sterilizer victims, stepped up to the podium and announced that the group officially refuses to accept “such a superficial, performance-like” apology and wants Reckitt Benckiser to shut down its Korean operation entirely. Saying that his child, who was 1 year old, died after inhaling Oxy sterilizer fumes for four months, Choi demanded the company visit every single victim and make it clear the parents were not to blame for using the fatal product and killing their own children.

Five years ago, the government linked mysterious pulmonary illnesses and deaths from 2004 to humidifier sterilizers. Consumers unwittingly inhaled the toxic chemicals after they mixed the sterilizer with water in their humidifiers. People who stayed home, such as infants, the elderly and pregnant women, were particularly vulnerable. The Oxy product allegedly killed the most victims among all of the deadly sterilizers. Prosecutors belatedly launched an investigation on April 19 into the 239 deaths reported since 2011, summoning former CEO Shin Hyun-woo for questioning on April 26. Shin held the post for over a decade until 2005 but insisted he did not know the sterilizer was toxic while at the company’s helm.

Discount supermarket chains Lotte Mart and Homeplus, which all sold sterilizer copycats under their private brands, scrambled to make public apologies and came up with compensation plans in the past two weeks.

The manufacturer of Oxy, on the other hand, opted for a simpler measure of sending an email to reporters on April 21 saying it would cough up 5 billion won ($4.4 million) for a “humanitarian fund” - an addition to the 5 billion won Safdar’s predecessor announced as a donation in 2014. That 10 billion won fund could be mobilized to compensate third- and fourth-degree patients, Safdar said.Earlier this year, the company attempted to refute the 2011 government report that confirmed the correlation between the chemical in the sterilizer and lung diseases. It submitted a report to prosecutors that the lung damage in victims may have been caused by severe yellow dust or germs produced by the humidifier.

The Korean unit imported the toxic chemical PHMG, or polyhexamethylene guanidine, which was mainly used for getting rid of incrustations in swimming pools and septic tanks overseas, and commercialized as a deadly humidifier sterilizer in October 2001. Based on a report from the company that the product was not harmful to humans, the government issued approval for its sale. Other retailers produced copycats using similar chemicals such as PGH and CMIT/MIT. No other country has sold such a product. The first batch of deaths from the sterilizers was reported in 2011. According to two rounds of government-led investigations into the case - in July 2013 and April 2015 - 530 people fell victim to the products, including 146 deaths. Of the deceased, 103, or 70 percent, used the Oxy sterilizer, followed by Lotte Mart’s at 22 and Homeplus’ at 15 and others, according to the Asian Citizen’s Center for Environment and Health, a civic group.