‘Captain America’ shatters records as it reaches No. 1

‘Captain America’ shatters records as it reaches No. 1 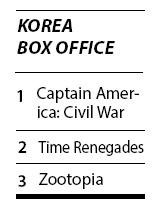 Everything went as expected in Korea’s weekend box office.

According to the state-run Korean Film Council on Monday, “Civil War” was seen by nearly four million people at 1,989 screens nationwide since opening last Wednesday.

In its first five days, the action flick made 32.8 billion won ($27.8 million), accounting for an astounding 90.6 percent of weekend box office sales.

Walt Disney Company Korea revealed Monday that its opening audience numbers outperformed that of “Avengers: Age of Ultron,” one of the most successful and buzzed-about films last year.

The latest installment of the “Captain America” franchise, which was again directed by brothers Anthony and Joe Russos, features the largest number of Marvel heroes than any movie prior, including Spider-Man (Tom Holland) and Black Panther (Chadwick Boseman).

It follows a conflict between Iron Man (Robert Downey Jr.) and Captain America (Chris Evans), who disagree with each other in signing a treaty that would jeopardize the Avengers’ autonomy.

Aside from the thunderous opening of “Civil War,” there were no major changes in the rest of the box office rankings, other than each film dropping down a notch.

Domestic romance thriller “Time Renegades” placed second with 86,665 seats filled, making its three-week total a little more than one million. Disney’s animated feature “Zootopia” came in third with 76,370 attendees, while the locally made comedy “The Last Ride” landed in fourth.