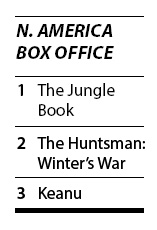 The weekend’s debuts withered under the stampede of “The Jungle Book.” Keegen-Michael Key and Jordan Peele’s feline action-comedy “Keanu” opened with a modest $9.4 million. That was a whisker behind “The Huntsman: Winter’s War,” which limped its way to $9.4 million in its second disappointing week of release.

Garry Marshall’s latest holiday-themed romantic comedy, “Mother’s Day,” bowed with a weak $8.3 million despite the presence of stars Jennifer Aniston and Julia Roberts. Though Marshall’s “Valentine’s Day” opened with $56.2 million in 2010, audiences have since been less enthusiastic for his poorly reviewed Hallmark card ensembles. “Mother’s Day,” even trails the $13 million opening of 2011’s “New Year’s Eve.”

With “Captain America: Civil War” opening next weekend in North America, the box office was largely in a holding pattern, waiting for Marvel to effectively launch the summer movie season. “Civil War” gave a preview of its might in 37 international territories over the weekend, taking in an estimated $200.2 million. That includes record openings in Mexico, Brazil and the Philippines for the film some expect to be the year’s biggest hit.

Once it lands, Disney will have accounted for three of the top five movies of the year, along with “The Jungle Book” and “Zootopia.” AP