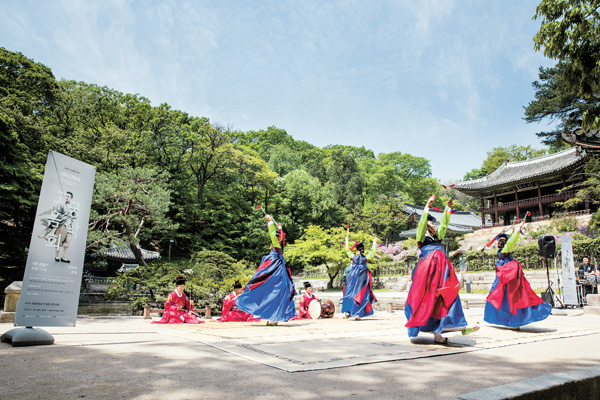 Music transcends national boundaries as well as time, as shown by the special traditional performances ongoing at the ancient places in Seoul.

“Each palace has its own charms, and [the performances] will offer distinctive programs that suit each one of them,” said Hwang Byung-ki, a famous gayageum (traditional zither) master, at a press conference last week.

With the series of performances running this spring and fall from May 14 to Oct. 16, people will be able to enjoy the cultural heritage of the Joseon Dynasty (1392-1910). The Korean Traditional Performing Arts Foundation, an affiliated organization of the Ministry of Culture, Sports and Tourism, is conducting the performances.

The performances began in 2009 and have grown more and more popular over the past seven years. This year, several improvements have been made to let people better enjoy them. First, the total number of performances increased from 50 to 60 shows. In addition, the types of performances have been expanded to include traditional and creative pansori (narrative singing), traditional sword dance and even special lectures on interesting episodes of Korean history.

Furthermore, the organizers said the performances will be woven around a common topic so that people can better understand Korean traditions. This year, the performances will tell the stories of King Sejong (1397-1450) and King Jeongjo (1752-1800), who helped shape the culture of the Joseon era.

Each venue will have different schedules and programs. Gyeongbok Palace will hold shows at 8 p.m. from May 18 to 22 and Sept. 28 to Oct. 2, during which nighttime tours are available. Music and dance companies from the National Gugak Center will perform and actor Nam Seong-jin will provide some explanation on the performances in relation to the tragic story of King Yeongjo (1694-1776), who killed his son, Crown Prince Sado (1735-62). The entrance fee is 3,000 won ($2.63) and tickets are available online through Auction and Interpark.

Changdeok Palace is hosting outdoor lectures at 9 a.m. every Sunday from May 15 to June 12 and Sept. 4 to Oct. 9. There are three different expert lectures on Korean history with accompanying performances. The lectures are on the banquet culture of Joseon, sijo (Korean poems) and the similarities between King Jeongjo and Hamlet, who had to gain power to avenge their fathers’ deaths.

Another program at the palace at 11 a.m. every Sunday from May 15 to June 12 will let participants experience the life of Lady Hyegyeonggung, the wife of Crown Prince Sado (1735-1815). Tickets are free but attendees should register for the program online in advance (www.gung.or.kr).

There are programs at Deoksu Palace are especially for children. Children’s stories will be recited along with traditional music. The shows are free and begin at 7:30 p.m. every Friday, Saturday and to Sunday from June 10 to 19 and Sept. 9 to 18.

At Jongmyo Shrine, performers will present the music of royal ancestral rituals. The performances will include music along with explanations of the life of King Sejong. They will be held at 9 a.m. every Saturday, from May 14 to June 11 and Sep. 17 to Oct. 15.

Visitors to Changyeong Palace will be able to hear the music that was enjoyed by royal families every Saturday morning from Aug. 6 to 27.

Foreigners are also welcome to enjoy the performances, and the organizers will provide pamphlets in Chinese, Japanese and English, with English subtitles included for the performances.