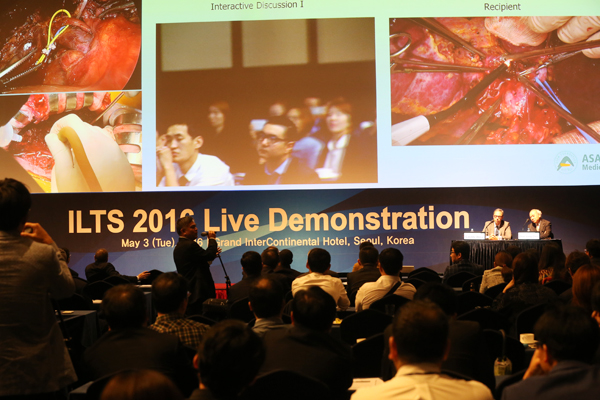 A dual-graft, living-donor liver transplant is live-streamed to the Grand Ballroom of the Grand InterContinental Seoul Parnas hotel on Tuesday as part of the 22nd Annual International Congress of the International Liver Transplantation Society, bringing the surgery to some 500 physicians visiting Seoul from around the world. [CHOI JUNG-DONG]

A Korean surgeon demonstrated a liver transplant on live-streaming video to some 500 doctors visiting Seoul from more than 50 countries Tuesday.

A team of surgeons led by Dr. Lee Sung-gyu worked on the patient, a 54-year-old man surnamed Park suffering from liver cirrhosis and liver cancer, and his two donors, his daughter and brother-in-law.

Every movement in the surgical theater at Asan Medical Center was caught on camera and streamed live to an audience in the Grand Ballroom of the Grand InterContinental Seoul Parnas hotel. Lee was the first doctor to successfully transplant pieces of two donors’ livers into one recipient more than 10 years ago.

The screen in the Grand Ballroom showed three feeds at once. One showed the surgeons cutting into Park’s abdomen, catching on screen the dark-red and rugged shape of Park’s liver. The two other feeds caught live the surgeries on Park’s daughter and brother-in-law.

While live-streaming a surgery may not be everyone’s cup of tea, the doctors considered it the ultimate opening act for the 22nd Annual International Congress of the International Liver Transplantation Society held in Seoul from Tuesday to Saturday.

“This is definitely a whole new level, seeing the surgery with my own eyes,” said Wayle Jassem, a surgeon from England. Most of the participants worked through lunch-boxes in the ballroom, eyes affixed to the screen.

The success rate in the United States is 80 to 85 percent.

“The 2-to-1 donor-to-recipient ratio lowers the risks, as the amount of liver detached becomes much smaller per donor,” said Dr. Cataldo Doria of Thomas Jefferson University Hospital in Philadelphia. “And recipients tend to recover faster since they received a larger portion of liver than they would have from a single live donor.”

Six hours into the surgery, the transplant was in its climactic phase. As the surgeons placed the two liver pieces inside Park and connected his blood vessels, shouts of joy issued from the ballroom. The surgery ended successfully around 5 p.m.

“I feel great that fellow doctors from all over the world came to witness the world-class liver transplantation skills of South Korea,” Dr. Lee said.

“I don’t know how the surgeons can conduct surgery so quickly yet very delicately,” said Olivier Souvrane, a doctor practicing in France.

Rapid developments in liver transplants in Korea is perhaps not too surprising given the high number of deaths from liver illness here, partly due to long working hours and a culture of heavy drinking.

Death from liver disease was one of the top 10 causes of mortality in Korea in 2014, according to Statistics Korea. That year, liver cancer was the top cause of death for people in their 40s to 50s dying from an illness.

The conference hosted in Seoul through this Saturday will offer 60 lectures and as many as 600 dissertations to more than 1,000 participating physicians from 54 countries.