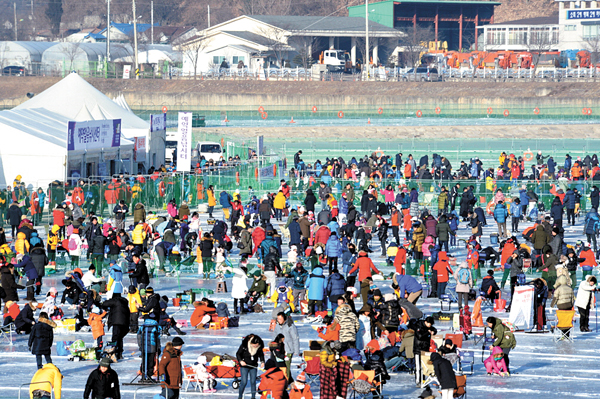 Fancy local festivals turned out to have dark sides. After pouring in pork-barrel budgets, most festivals resulted in deficits. The aging population increased welfare demands, and the populism of elected officials led to excessive local festivals.

The Ministry of the Interior’s Local Government Finances 365 (lofin.moi.go.kr) revealed the conditions on May 1. According to the website, 361 local festivals that cost more than 300 million won ($260,000) were held in 2014, and only one that did not lose money was the Hwacheon Sancheoneo Ice Festival in Gangwon.

The taxpayers ended up with the expensive bills. A 29-year-old Chuncheon resident said, “I am angry that taxpayers’ valuable money was wasted on these meaningless and boring events.”

Of course, there are positive aspects to local festivals as they can vitalize local economies by attracting tourists. However, local governments in charge of community finance are organizing festivals and events without thorough preparation. Financial situations of local governments are not very good. Among the 226 local autonomous governments, 75 of them could not afford to pay the civil servants’ payroll costs with their own earnings.

The Ministry of Security and Public Administration wants to revise the Basic Act on Local Tax so that the local corporate tax collected in wealthier cities and counties can be redistributed to struggling cities and counties. And it led to discord between the central and local governments.

At this juncture, criticism is increasing as some festivals and events incurred major deficits — as much as 11 billion won.

Yoo Seong-cheol, secretary general of the Gangwon Civil Groups Association, said that festivals and events that are essential to the community due to historic and public value should be maintained even when they result in a loss, but an evaluation committee of cultural experts and artists needs to be formed to make sure an event is worth investing in.

Experts say that other local governments should learn from the example of Hwacheon County, Gangwon, the only event that was in the black. Hwacheon, whose population is only 27,000, had a gain of 52 million won from the Sancheoneo Festival. The festival started with 220,000 visitors when it first began in 2003, and last year it had a record number of 1.54 million visitors. Hwacheon County encouraged participation of the local people and led aggressive facility investment and marketing campaigns.

Lee Sun-chul, an adjunct professor at Sookmyung University’s Graduate School of Public Policy and Industry, underscored that local governments must study hard to create added values to the region and abolish and merge redundant festivals.

Before it’s too late, we must rearrange meaningless festivals and events that only waste taxpayers’ money.