Park basks in afterglow of success in Iran

Park basks in afterglow of success in Iran 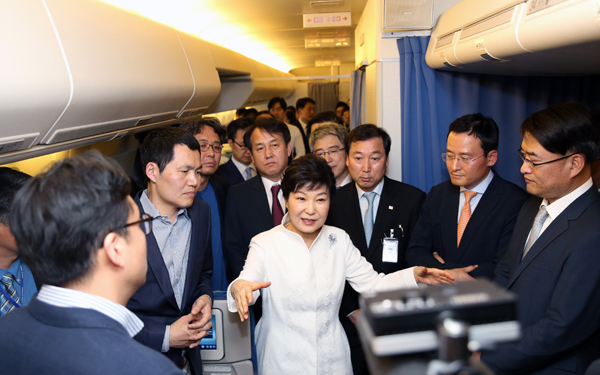 President Park Geun-hye said Tuesday it was a “significant” move for Iran to openly oppose North Korea’s nuclear ambitions given its durable partnership with Pyongyang.

Park’s remarks were made aboard the presidential plane en route to Seoul from Tehran during a meeting with journalists as she wrapped up a three-day visit to the Middle Eastern country.

“As you all know, Iran and North Korea have maintained a friendly relationship dating back years and the fact that Iran clearly stated its position against nuclear efforts by the North carries significant meaning and is a very rare move,” said Park, referring to a comment by her Iranian counterpart, President Hassan Rouhani, during a joint press conference on Monday.

While he did not cite North Korea by name, his reference was seen as a direct message to Pyongyang not to follow the path toward nuclear weapons.

Rouhani’s remark was welcomed by South Korean officials considering the oil-rich country’s deep connections with Pyongyang, which is suspected to have exchanged missile technologies with Tehran, a claim denied by the latter.

North Korea and Iran established diplomatic ties in 1973, and relations blossomed in the 1980s. In addition to their shared hostility toward the United States, the two countries are known to have traded missile and nuclear technologies. Pyongyang supported Iranian forces during the Iran-Iraq War (1980-88).

While Rouhani’s remarks were unusual, it is questionable if they will have any impact on Pyongyang. Disregarding international opprobrium, the North conducted what it claimed to be a hydrogen bomb test in January this year, its fourth nuclear test since 2006, and could be preparing a fifth soon.

Iran has recently seen the lifting of crushing international sanctions as a result of its landmark deal with the United States and five other world powers last year curbing its nuclear program. It is now a magnet for investments from all around the world.

Park’s visit to Iran and her summit with Rouhani, the first leadership summit between the two nations since they started diplomatic relations in 1962, was her attempt to tap into the business opportunities offered by Iran following the ending of sanctions. The Iranian president said the two countries agreed to triple trade after signing economic cooperation agreements Monday.