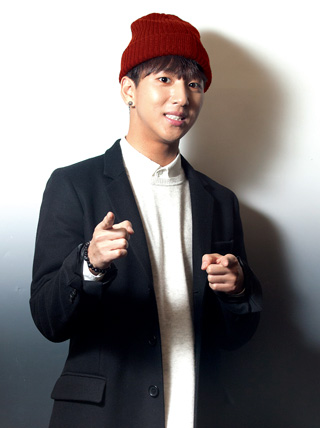 
Baro of K-pop boy group B1A4 is expanding his presence beyond the music realm, taking on roles he has never played before. His latest gig has him portraying a villain for the first time in his acting career, in the new KBS drama “Master: God of Noodles,” which started airing last week.

Baro plays the younger version of the drama’s lead character, played by Cho Jae-Hyun, in a show where people grow and fail in life through love, distorted ambitions to succeed and struggles with personal relationships.

In the drama, the protagonist is a psychopath who doesn’t feel any sense of guilt about a murder and only pursues ways to fulfill his ambitions in life.

Baro sat down for an interview with Ilgan Sports, an affiliate of the Korea JoongAng Daily, where the actor said he did not expect to see so many good reviews from the audience and critics, nor did he expect so many to agree with his character’s actions.

A. It is my first time playing such a role. I’m just thankful that the audience and fans like how I do it.

What are things you do to practice playing the character?

I tried to talk to the director as much as possible so that I can decide how to express what’s written in the script.

I think I had good communication with the director. It was difficult for me because it was my first time playing the villain ever since I debuted, but I got some good guidance from the director, and without realizing it, I started to feel comfortable with the character I play.

How is playing the villain different?

It was charming to have to say everything through my eyes without making too many changes in my facial expressions. It was hard in the beginning, but the more I did it, the more it felt like I was really falling for the character.

What are things you decided to put more focus on?

I had to show how dark, how cold he is from the outside. However, at the same time, I thought I needed to show all the pain and struggles he had experienced before in a very cool yet casual manner. That was the part I really focused on in analyzing this character.

I’m thankful that people find entertainment in this drama, and I hope they continue showing such love.

I will also work hard to present a better performance on stage and through good [dramas].