Gov’t vows to help retailers over the holiday

Gov’t vows to help retailers over the holiday 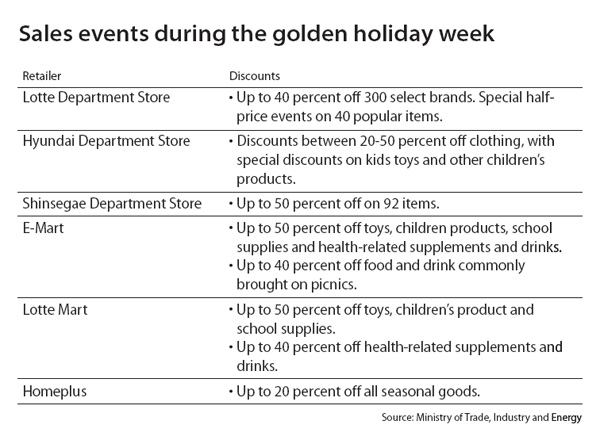 The government is setting up a special support team to help local retailers who are holding discount events during the so-called golden week holiday that kicked off yesterday.

“The government plans to provide full support to vitalize the domestic economy by utilizing the opportunity presented by the golden week holiday,” said Vice Minister of Trade, Industry and Energy Lee Kwan-sup on Wednesday. “The government will set up a special support team within the ministry that will help companies through any difficulties they may face during the holiday.”

They discussed the retailers’ role in boosting sales during the holiday that started with Children’s Day yesterday and continues through Friday, which has been designated by the government as a temporary holiday, and extends to Sunday. He also talked about the support the government can provide.

Hoping to encourage more people to go out and spend during the holiday, the government has already said it will give free access to both government-built and privately run highways, which often charge higher tolls. It will also offer free admission to many cultural sites such as museums and palaces.

Last year, when the government designated the Friday before Korean Independence Day weekend as a temporary holiday, it created an economic impact of 1.31 trillion won in increased spending, according to an estimate by the Hyundai Research Institute

The government expects an even larger impact this time as the break is a day longer and the focus is on children, meaning that parents and other relatives will likely be buying toys.

Additionally as the weather has become warmer, the holiday is expected to encourage Korean consumers to venture outdoors to go on picnics, camping trips or to travel to provincial areas. In fact, reservations have already been booked at many of the major hotels in the provinces.

Retailers are trying to cash in by creating major discount events, including up to 80 percent off items such as clothes, children’s toys, school supplies or picnic and camping gear.