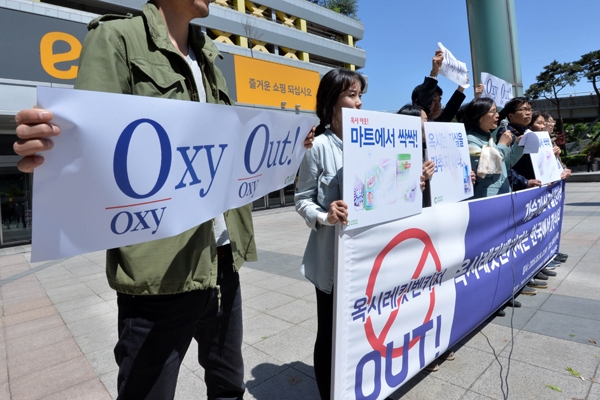 Civic groups and the families of those affected by Reckitt Benckiser Korea’s poisonous Oxy humidifier sterilizers boycott the company’s products and urge it to close business in Korea on Wednesday in front of the Emart in Yongsan District, central Seoul. [NEWSIS]

In response to growing public outrage over Oxy, retailers are rushing to pull all products made by Reckitt Benckiser Korea from their shelves.

From 2001 to 2011, the British manufacturer sold humidifier sterilizers containing a toxic chemical that reportedly killed more than 100 people in Korea.

Supermarket chains including Lotte Mart and e-commerce companies such as Coupang, WeMakePrice and TMON have announced they will reduce or entirely halt sales of Oxy products.

TMON officially announced on Wednesday that it will stop selling Oxy products and cancel all pre-existing orders by midnight. The company says it will also ask individual sellers registered to sell the products on their website to stop offering them.

Coupang and WeMakePrice had already stopped directly selling or placing new orders for the products.

Because of the nature of the platforms, companies like Ebay Korea and 11st can’t force individual sellers not to offer Oxy products, but they are rejecting the company’s requests for new advertisements or promotions.

Galleria Department Store has also suspended sales of the products on both its offline and online malls. CJ Mall stopped sales as well.

Lotte Mart said on Tuesday that it would stop placing new orders from Oxy on Tuesday and agreed to pull all products from stores starting this week. The company’s promotions will also be suspended, and by next week, Lotte Mart says there will be little visible evidence it ever sold Oxy products.

The boycott has gathered momentum over the past week. The labor unions of Emart, Lotte Mart and Homeplus - the nation’s top retailers - urged them to suspend sales, saying, “Stop the sale of murderous company Oxy!” on Monday.

Civic groups followed with online petitions and Facebook pages urging the public to help them rid Korea of Oxy products.

On Thursday, the Korea Federation of Environmental Movements held a campaign in front of Seoul City Hall so that people could take photos with a big “Oxy out!” sign and upload it online.

The Korea Federation of Micro Enterprise, which represents seven million small businesses, announced on Wednesday that it will boycott the company.

Meanwhile, a delegation including the victims’ families headed to Reckitt Benckiser headquarters in London and arrived on Wednesday local time.

They plan to read an official statement explaining the damage caused by the humidifier sterilizers and ask the company to take full responsibility at its annual shareholders meeting to be held in London on Thursday, though they have not been approved to attend.

An official meeting with the company’s CEO, Rakesh Kapoor, is expected to take place on Friday.