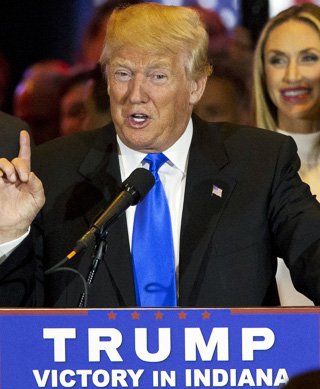 Donald Trump, the presumptive Republican nominee for U.S. president, said that South Korea should be responsible for “100 percent” of all costs related to maintaining U.S. troops on the peninsula in an interview on Wednesday — or be prepared to defend itself on its own.
While he has made similar remarks in the past, Trump’s positions are gaining increased scrutiny since his last rival for the Republican nomination, Ohio Gov. John Kasich, dropped out of the race Wednesday. Senator Ted Cruz of Texas ended his bid Tuesday.

The real estate mogul has not tried to take a more serious approach to foreign policy, especially toward U.S. allies. In turn, the Korean government is starting to contemplate a possible Trump presidency and working on expanding its contacts with his camp.

In an interview with CNN on Wednesday, Trump, when reminded that South Korea already shoulders around half the cost of keeping U.S. troops in the country, riposted, “Why not 100 percent?”

Trump added that U.S. allies such as Korea, Japan and Germany “should pick up all the expense” for defense, asking, “Why are we paying for this?”

He suggested Washington would leave the region unless allies paid more. “They’re going to have to defend themselves,” he said.
Trump has touted an “America first” policy that seems to call for U.S. isolationism, which would undermine Washington’s decades-old security alliances, including that with Seoul.

The businessman has previously said he was open to South Korea and Japan having their own nuclear weapons to defend against Pyongyang, indicating that Washington’s nuclear umbrella in the region could be withdrawn should he become president and if allies don’t pay the United States more. He has consistently emphasized a will to consider withdrawing U.S. troops from the region.

Trump shrugs off Seoul’s shouldering of over 920 billion won ($790 million) annually for keeping some 28,500 U.S. troops in the country, an amount he has described as “peanuts.”

And Trump, who has been critical of free trade deals in general, may also call for renegotiation of the Korea-U.S. free trade agreement that took effect in 2012.

Although Trump has not yet secured the 1,237 delegates he needs to win the Republican nomination, he is expected to reach the number by June. Thus, he will likely run against Democratic front-runner Hillary Clinton, the former U.S. state secretary, though Senator Bernie Sanders of Vermont continues to challenge her.

A Korean Ministry of Foreign Affairs official told reporters on the condition of anonymity on Wednesday that “regardless of the results of the U.S. presidential elections, we ascertain that we will firmly advance the Korea-U.S. alliance, which is based upon the shared values of democracy and a market economy.”

“As there is a chance that Trump may be elected, we will be on close watch through the elections in November,” another Korean government official said. “We are continuing our efforts to expand our network to those aiding Trump.”

Korean analysts generally do not believe that Trump’s stump promises will translate into policy if he is elected president in November.
“Trump right now is approaching foreign policy and security purely from a businessman’s point of view,” Korea National Diplomatic Academy Chancellor Yun Duk-min told the JoongAng Ilbo on Wednesday.

“When he becomes the Republican nominee and picks advisers, he will unfold a new policy that will reflect the interests of the United States and put proper importance on the Korea-U.S. relationship.”

“Trump’s remarks right now are in order to garner votes,” Chun Yung-woo, a former presidential national security adviser, said. “If Trump is elected, we need to prepare for what we will give and take diplomatically.”