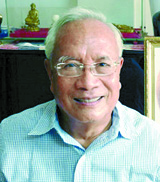 A prestigious human rights award that commemorates one of Korea’s defining democratic moments has angered an Asian government - because it honors one of its dissidents.

Late last month, Nguyen Dan Que, 74, a pro-democracy activist in Vietnam, was named this year’s recipient of the Gwangju Prize for Human Rights, along with Bersih, a coalition of nongovernmental organizations in Malaysia that fights for fair elections.

The committee responsible for naming the award winners declared on Thursday that the Vietnamese government has demanded a retraction and is pushing Korean authorities to “take all necessary actions” to ensure that the award be withdrawn. Hanoi threatened strained diplomatic relations if Seoul fails to follow through.

A letter dated April 22 from the Embassy of Vietnam in Seoul to the Ministry of Foreign Affairs expressed Hanoi’s strong disapproval of Que receiving the award, which was announced by the May 18 Memorial Foundation on April 21. May 18 was the day in 1980 that the Chun Doo Hwan government started a crackdown on pro-democracy protestors in Gwangju that killed over 100 people.

It is “unreasonable” that Que be named a winner because he “has had criminal records of convictions and offences for violating [the] national security” of Vietnam, the single-page letter read.

While noting that the Vietnamese government “strongly” requested the award be rescinded, the embassy said that a failure to do so would be “against the interest of the strategic partnership” between the two countries.

The May 18 Memorial Foundation awards committee said on Thursday that it was informed of the protest when the Ministry of Foreign Affairs forwarded the letter to it. The foundation stressed it would not comply.

“We’ve decided not to respond,” said Kim Yang-rae, executive director of the foundation. “In the letter, it only says he violated national security laws and nothing about the backdrop.”

The Embassy of Vietnam did not answer calls on Thursday, a holiday, and neither did Korea’s Foreign Affairs Ministry.

Established in 1994 to commemorate the 1980 Gwangju Democratization Movement, the foundation has annually honored an individual or organization to highlight their “contribution to the improvement and advancement of human rights.”

Jailed since 2011 for the fourth time, Que is a physician in Ho Chi Minh City who led pro-democracy demonstrations. He has spent a total of over 20 years behind bars.