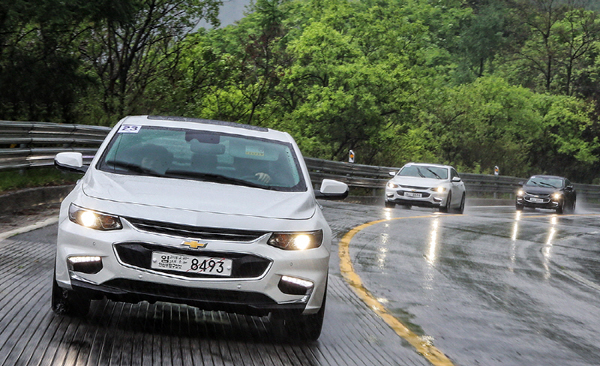 General Motors Korea is confident that its new lighter and more powerful Malibu will leave its competitors behind in the marketplace.

The country’s third-largest automaker held a media test driving day at the W Hotel in eastern Seoul on Tuesday, and a handful of company executives and technicians took turns explaining the differences and strengths of the Malibu compared to its competition and the benefits the automaker plans to offer customers.

“Its total mass dropped by 130 kilograms [286 pounds], but it is stiffer and stronger than the previous generation,” said GM Korea Vice President Dales Sullivan. “The individual consumption tax will end in June and we don’t want our customers to miss the discount opportunity. We will offer cuts equivalent to the tax benefit even for customers that receive their vehicles after the end date if they make preorders.”

Built on an entirely new architecture, the new Malibu is 6 centimeters (2.36 inches) longer and has a wheelbase that is 9.3 centimeters longer than the previous model. That makes it the most spacious and longest sedan in its segment, according to the manufacturer.

The Korea JoongAng Daily got behind the wheel on Tuesday to check out the Malibu’s various features, taking a 100-kilometer round-trip trip from the W Hotel to the Jungmisan Observatory in Gapyeong, Gyeonggi.

The test drive was done on the highest-trim model, with a 2.0-liter turbo engine.

On the way to Jungmisan, the performance and power of the car were tested on both highways and curved, sloping roads, which GM Korea intentionally added to the course. Even although it was raining heavily that day, the car remained very stable through the extreme weather on rough roads.

The 2.0-liter engine, which is also used in Cadillac’s CTS models, offers a fuel economy of 10.8 kilometers per liter (25.4 miles per gallon) with a maximum 253 horsepower and 36 kilogram-meters (260.4 pound-feet) of torque.

During the two-hour test drive, we managed to get 11.9 kilometers per liter in fuel efficiency, better than the company promoted, despite the bad weather and slippery road conditions.

Among some 11 new safety features, the lane-changing technology, which warns the driver if the vehicle crosses into another lane, was the most useful. The feature proved its worth on the mostly narrow, curvy two-lane road in both directions to and from Jungmisan.

Another interesting feature was the Malibu’s pedestrian auto-braking technology. According to the manufacturer, its front camera sends signs to the driver when a pedestrian is ahead of the vehicle and brakes automatically if the driver doesn’t take evasive action.

“I was very nervous when we were first evaluating the technology with a dummy,” said GM’s Short. “It really was a surprise when it did work, but I hope nobody experiences this today.”

Fortunately, during the test drive, there was no real-life reason to test the feature.

GM Korea continually pointed out the Malibu’s large leg room, both in the front and back seats, which is roomier than most midsize sedans. The Malibu’s total length is 492.5 centimeters is even longer than Hyundai Motor’s mid- to large-size sedan Grandeur, which is 492 centimeters.

The automaker didn’t give out its sales goal for the model but was confident it would beat the sales of other cars in the segment such as the Hyundai Sonata and Renault Samsung’s SM6.


GM Korea unveiled its new Malibu, a long-time best-selling sedan, under its Chevrolet brand on April 27. And within four business days after the launching event, it received 6,000 preorders.

“We are getting 1,500 orders a day and we plan to operate our production lines even during the long weekend to meet demand,” said an official at GM Korea.

The model will officially go on sale May 19.

The sticker price ranges from 23.1 million won ($19,991) to 31.8 million won. The individual consumption tax cut on cars, which will be in effect until June, is reflected in the price.

A hybrid version is planned for release by this summer, GM Korea said.