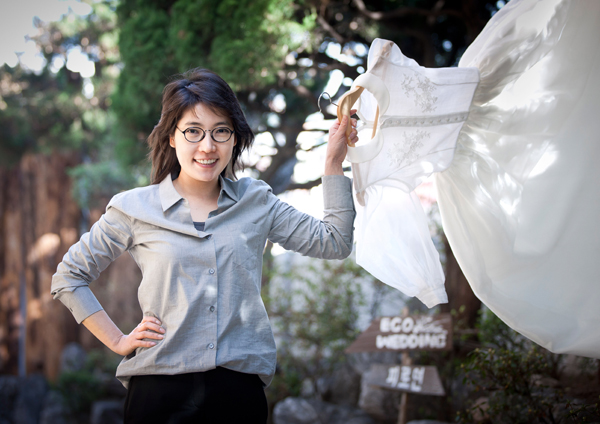 Lee Kyung-jae, head of Sewing for Soil, holds up a dress made from environmentally-friendly materials including corn starch, traditional Korean paper and ramie from South Chungcheong. [KWON HYUK-JAE]

The master hand behind the wedding of actress Lee Hyo-ri in 2013 is an eco-friendly designer, as well as a wedding planner, who has devoted herself to nurturing the growth of an environmentally-friendly wedding culture in Korea.

Designer Lee Kyung-jae, 37, is the founder of a social enterprise, Sewing for Soil. Started in 2008, the enterprise has helped about 300 couples organize small-size and environmentally-friendly weddings.

“I think more and more people in Korea are trying to have a reasonably-priced wedding,” said Lee, whose first job was at a dressing room in a broadcasting company. Although other people envied her job for its stability, Lee rarely got the chance to actually design clothes, since most of the products they used were sponsored by clothing companies.

“There weren’t any means to express what kind of a designer I am,” Lee recalled. “I wanted to find my identity by actually creating the designs I had in my mind.”

“In 2005, there were a lot of celebrity weddings,” Lee said. “As I watched the public eyeing and admiring the dresses of these celebrities, which cost hundreds of millions of won, I started to think about the environmental impact of such clothing.”

Wedding dresses designed by Lee, unlike ordinary ones, are made with corn starch, hanji (traditional Korean paper) and nettle, all of which are biodegradable. Lee’s dresses are also designed to be used as everyday clothes. Her wedding invitation cards can be used as picture frames, and the flower bouquets are arranged with the roots still attached so that the flowers can later be replanted.

In 2013, she organized a small wedding at Seoul Citizens Hall in Jung District, central Seoul, with a budget of 6 million won ($5,100), far less than the average wedding fee paid by Korean couples, which is typically 51 million won, according to a survey from a matchmaking and wedding consulting company DUOWED.

“The wedding was meant to show that if a couple saves up 500,000 won per month for half a year, it’s enough to organize a wedding,” Lee said.

Currently, Lee has been devoting substantial time to planning weddings on a local level. The purpose of this, she says, is to change Korea’s current practice, whereby almost every wedding, as well as the wedding pictures, dress selection and other aspects of the ceremony, are done entirely in Gangnam District, southern Seoul. For instance, Lee organized a wedding in Seongbuk District, northern Seoul, where food, drinks and flowers were supplied from local stores, and the hair of the bride and groom were done by local hair salons.

“We ordered galbitang [hot beef rib soup] from a renowned local restaurant and Dutch coffee from a local coffee shop, and they were way better than the food often provided by catering services,” she said.

Lee paid about 80,000 won to 100,000 won per hour to senior adults in the area who then arranged any food that had to be cooked immediately before being served, such as salads.

“I hope that local-level weddings become popular in other areas as well,” Lee said. “That’s one reason why I created this business.”