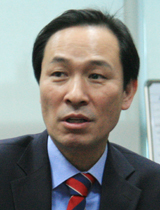 Rep. Woo Sang-ho, the new floor leader of the Minjoo Party of Korea, believes the government should give North Korea an incentive to give up its nuclear weapons and open up a communication channel with the regime in order to bring it to the negotiation table.

Woo, who won his third term in the April 13 general election, recently sat down to speak with the JoongAng Ilbo on Thursday and Friday.

Q. Some say that Minjoo should not be a party of “democratic movement,” referring to the uncompromising approach of student democracy activists-turned-lawmakers in parliamentary affairs.

A. I find such degrading remarks about former student activists, who championed democracy against the military government in the 1980s, very humiliating and upsetting. They are the people who voluntarily gave up personal opportunities for success in college and instead sacrificed themselves for the greater good. While I often told former college activists that they should not boast about the pro-democracy efforts they made in their college years, we should not discredit or overlook their contributions. … But when it comes to ending internal factions within the party, I am ready to commit myself to doing so.

The People’s Party has suggested forming a coalition government.

A coalition government is composed of political parties with different ideologies on the same boat. But forging a coalition with the Park Geun-hye government is tantamount to going directly against the will of the people manifested in the outcome of the April 13 general election.

There seems to be a rift between former party chairman Moon Jae-in and incumbent Kim Chong-in.

Kim and Moon do not differ on any policy issues. As the party has agreed to hold a national convention at the end of August or in early September, I do not think the two of them have any dispute. But if there are any hurt feelings between them, I will be an intermediary in resolving the conflict.

What role will you ask of interim leader Kim Chong-in after the Minjoo elects a new leader in the national convention to be held in about four months?

I will first listen to his suggestions. He came to join our party with an agenda of changing the power in the Blue House for the sake of economic democratization. Though he might have his feelings hurt in dealing with party members, I don’t believe he will leave the Minjoo given his firm belief in his cause of economic reform.

I think Park will continue to make such claims about the pro-Roh Moo-hyun faction, led by Moon, because he thinks doing so will help his party. But our party keeps evolving, with many presidential hopefuls and seasoned politicians who have weathered electoral challenges and tough times. While Moon remains the most formidable presidential contender, no one knows who will clinch the nomination in the end.

Critics say the Minjoo’s general meeting of lawmakers at the National Assembly for policy discussion is merely a platform for uncompromising hardliners.

The meeting should be a venue for policy decisions, not internal strife. We must strive for unity, but also we should not repress different opinions. We should address issues closely related to people’s lives, such as stabilizing housing rent prices. We must present solutions to these issues and gain an assessment from the public that our party’s ideas are better than the others. We will not waste time confronting the Park Geun-hye government.