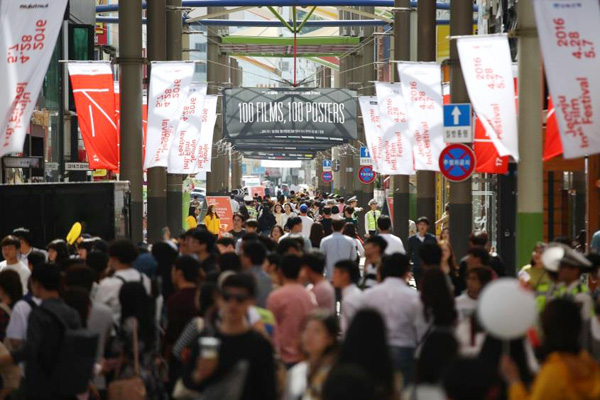 The 17th edition of the Jeonju International Film Festival, which wrapped up its 10-day run on Saturday in Jeonju, North Jeolla, was successful both commercially and in terms of its independent spirit.

As of Friday, the festival sold out 219 screenings, which is the highest number ever. Until this year, the record was held by the 15th edition in 2014, when it sold out 214 screenings during its 10-day run.

In addition to seeing a tangible commercial outcome, the festival was able to maintain its identity of being alternative and independent.

“We tried especially hard to protect freedom of expression in this year’s film festival, which I think the audience gave high points to, leading to a successful outcome,” said Kim Young-jin, the festival’s executive programmer on Saturday.

“As the Jeonju International Film Festival advocates the value of being alternative and independent, we thought it was right to widen the lineup’s spectrum for the audience,” said Lee Choong-jik, the newly appointed executive director.

“We are going to protect the core values of our festival by accommodating films that are artistically ambiguous and socially controversial.”

On Thursday, the festival gave out 11 trophies to films that represented that spirit.

The film portrays the collision of the country’s hereditary customs and the new values. Conflict begins when Jalila feels injustice and jealousy while preparing the wedding ceremony for her husband’s second wife. 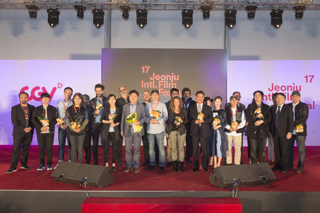 Award winners and other participants of the festival’s award ceremony pose for a photo Thursday evening. [JEONJU INTERNATIONAL FILM FESTIVAL]

It follows the life of an involuntary loner named Mike when he accepts a friend’s request to operate a small travel company in Philadelphia. No matter where he stays or what he does for a living, nothing changes in his all-too boring and solitary life.

Programmer Jang Byung-won compared the flow of the piece to films by Hong Sang-soo or Eric Rohmer.

“Films that tried to disclose naked aspects of their country stood out in this year’s international competitions sector,” said Jean-Francois Rauger, a programming dirctor at the Cinematheque Francaise in Paris, who participated in JIFF as a jury member.

“I hope the directors will continue to shed light on aspects of their societies that we don’t get to see often.”

Showing the careful approach they take to each other, the film describes a same-sex relationship in a conservative society like Korea. Ko’s “Delta Boys” is a comedy following the pathetic yet energetic lives of four underdogs.

Directed by news producer Choi Seung-ho, “Spy Nation” digs deep into the case of Yoo Woo-seong, a defector from North Korea who was accused of espionage based on evidence fabricated by the National Intelligence Service.

The art-house-oriented festival drew its curtains Saturday evening with the closing film “Die Bad,” a digitally remastered version of Ryoo Seung-wan’s 2000 movie, which catapulted the indie filmmaker to stardom.