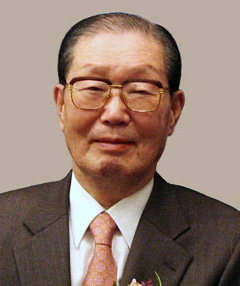 The last surviving first-generation member of the LG founding family has died.

Koo Tai-hwoi, honorary chairman of LS Cable & System, died at his home in Sinsa-dong, Seoul, at the age of 93 on Saturday.

Koo Tai-hwoi is the fourth among the six brothers of the LG Group founding family. The eldest, founder Koo In-hoe, passed away in 1969.

Koo Tai-hwoi was also a politician who held senior positions in the government during the 1970s.

Born in Jinyang, South Gyeongsang, in 1923, he went to high school in Fukuoka, Japan, before graduating from Seoul National University with a bachelor’s degree in politics.

After graduating, he joined his brother’s company Luk Hui Chemical Industrial, which today is LG Chem, and helped create the company’s hit product, a cosmetic container with a lid that didn’t break.
He was vice president of Goldstar, which later became today’s LG Electronics, in 1956. Around this time he started to take part in politics.

After being elected as a lawmaker in 1958 he was re-elected in five more elections. He served as the minister of state affairs and also the National Assembly’s vice speaker. He returned to the family business in 1982 as an advisor of LG Group. In 2002 he became the honorary chairman of LG Group’s cable and system unit. He worked with his younger brothers Koo Pyong-hwoi, late chairman of E1, and Koo Doo-hwoi, late chairman of Yesco, to spin off E1, Yesco and LS in 2003.

According to LS Group, Koo Tai-hwoi created a management succession philosophy that would help brothers or even cousins pass on business management responsibilities without major disputes between siblings or relatives, unlike other major conglomerates.

This showed that succession between cousins are possible without major disputes.

Koo Tai-hwoi is also well known for his modest habits. He enjoyed having meals with his children that would not cost more than 30,000 won for each person. He called the meeting “the 30,000 nyang club,” nyang being the traditional Korean currency during the Joseon Dynasty.

Until couple of years ago he would meet with high ranking executives near his house where they would have light meals while talking about the rapid development of Korea’s economy in the 1960s and 70s.

The funeral is to be held at the Asan Medical Center in southeastern Seoul and the funeral service will take place at 9:30 a.m. on Wednesday. The late Koo Tai-hwoi will be buried at a graveyard in Opo, Gwangju, Gyeonggi.