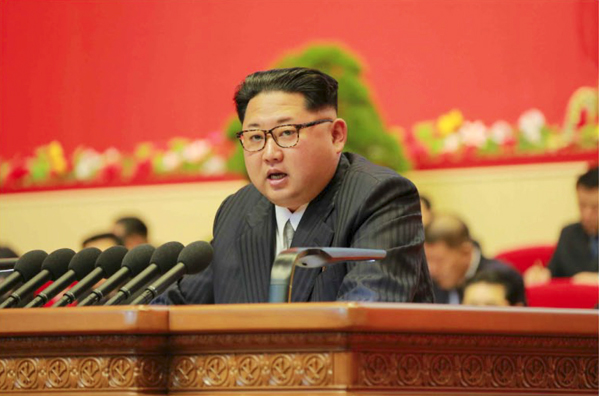 North Korean leader Kim Jong-un speaks at a party congress in Pyongyang in a photo published by the Rodong Sinmun, North Korea’s Workers’ Party’s official newspaper, Sunday. North Korea will not use its nuclear weapons first unless its sovereignty is threatened, state media Sunday quoted Kim as saying during a ruling party congress. [RODONG SINMUN]

North Korean leader Kim Jong-un said his country will not use nuclear weapons as long as the country’s sovereignty is not threatened and called his regime “a responsible nuclear state” at the seventh congress of the Workers’ Party in Pyongyang.

“Our republic will not use a nuclear weapon unless its sovereignty is encroached upon by any aggressive hostile forces with nukes,” Kim was quoted as saying by the Korean Central News Agency (KCNA) on Sunday. Kim made the remark in a report on the achievements of the Workers’ Party during the congress. KCNA didn’t specify whether Kim made the remark on Friday or Saturday.

It was considered a clear rebuff to calls from the international community that he drops North Korea’s nuclear ambitions.

Kim’s address was broadcast by the Korean Central Television at 3:30 p.m. Sunday. In a black suit and with horn-rimmed glasses, Kim made the speech interrupted by frequent applause by a somber-looking audience, some in military uniforms.

The country’s biggest political event opened Friday in the April 25 House of Culture in Pyongyang for the first time in 36 years, drawing some 3,000 party delegates elected at lower party meetings across the country to showcase and solidify Kim’s leadership.

In what was seen as a jab at the international community, particularly South Korea and the United States, Kim said his nuclear-armed country would “faithfully fulfill its obligation for non-proliferation and strive for the global denuclearization.”

Kim’s pledge to work toward global denuclearization was an obvious rejection of international demands that he abandon nuclear weapons.

South Korea’s Unification Ministry saw Kim’s non-proliferation pledge as a clear signal that he would continue to build up his nuclear arsenal.

“Kim’s remark on non-proliferation has the premise that his country is already nuclear-armed,” said a South Korean official who spoke on the condition of anonymity. “If you don’t have a nuclear weapon, why would you care about non-nuclear proliferation?” The official added the South Korean government would continue its pressure and sanctions on the North.

“Kim’s message about global denuclearization is tantamount to saying he has no intention whatsoever to give up his nuclear arms,” said Ko Yoo-hwan, a North Korea studies professor at Dongguk University. “The underlying message is that he would throw in his nuclear card only when the world as a whole is free of nuclear weapons, which is hardly feasible.”

Kim emphasized his so-called byungjin policy, a dual-track emphasis on both economic improvement and nuclear weapon development. He said the policy had safeguarded the country, calling it “a sure guarantee” that ended “confrontation with the imperialists and the U.S.”

“The byungjin line is not a temporary policy track but a strategic one that should be sustained eternally for the sake of the revolution with nuclear deterrent as the bedrock of our military defense,” said Kim, who called the dual-track the “most justified and revolutionary policy to make of a powerful socialist country.”

Kim’s byungjin policy is another rejection of calls from Seoul and the international community that he prioritize his economy by dropping his nuclear ambitions.

Kim also indicated he would continue to honor the military-first policy of his father, calling it a “fundamental principle of socialism” that would “bolster revolution with the armed forces at the center of the drive.”

The North’s military-first policy has been cited as one of the factors responsible for its economic downfall since so many resources were diverted to the military rather than helping the economy and raising the livelihoods of the people.

On inter-Korea relations, Kim said improving the South-North relationship was an urgent mission facing the two Koreas and demanded Seoul change its attitude toward his regime.

“The South government should discard its confrontational approach with the North and take a fresh attitude in dealing with us,” demanded Kim. He argued the two sides were capable of improving ties through talks.

“The North and South should together get rid of legal and institutional hurdles that stand in the way of unity between the two Koreas and take measures that will pave the way for improved ties.”

Inter-Korea relations have hit a low since the North’s fourth nuclear test in January followed by a long-range missile launch, both of which were condemned by the South and the international community as violations of United Nations resolutions.

Upset by the provocations, the Park Geun-hye government pulled South Korean companies from a joint industrial complex across the border in Kaesong in February, putting an end to the last vestige of the inter-Korean business cooperation that started in 2004. Kim’s demand that Seoul change its attitude was seen as blaming the South for strains while at the same time signaling an intention for better relations.

“The North’s overture is nothing more than a masked campaign that carries no sincerity as manifested by its continuing nuclear threats that directly target the South and threaten the survival of the Korean people,” said Unification Ministry spokesman Jeong.

Kim also proposed military talks between the two sides, saying such talks would reduce the possibility of an armed conflict at the border. He demanded Seoul and Washington end their joint annual military exercises and said the two Koreas should stop any forms of confrontational military tactics along the border such as psychological warfare through loudspeakers and launching of anti-North leaflets. A halt to the annual joint military exercises is a longtime demand by Pyongyang, which it sees them as an existential threat to its regime.

On the economic front, Kim declared a “five-year strategy for state economic development” from 2016 to 2020, which aims to upgrade various sectors including electricity, light industry and agriculture, though he did not elaborate on details.

The sixth congress Workers’ Party was held in Pyongyang in 1980 and was used as an official platform to elevate Kim Jong-il as heir apparent to his father Kim Il Sung. After his father’s death in 1994, Kim ruled the country from 1994 to until his death in 2011, during which the North was hit with a severe famine that starved up to 3 million people to death. Kim Jong-un acknowledged economic suffering in the mid-1990s in his speech, saying his country was “hit by natural disasters” that brought “untold hardships and trial” to its 23 million people.

While no reports on the third day of the congress on Sunday were made by the North Korean media as of press time, it was expected that the party would revise its rules and elect Kim to the party’s top post. The party was also expected to elect new officials deemed loyal to the young Kim for top party positions.

The Blue House did not issue a statement on Kim’s address. But some officials expressed skepticism over any sign of significant change.