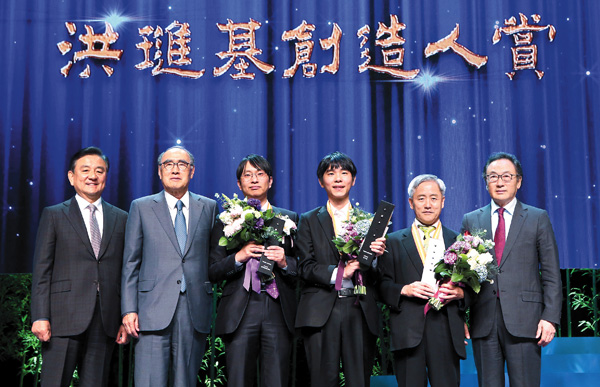 Recipients of the seventh annual Yumin Awards gather at the Hoam Art Hall in central Seoul on Monday. This year’s prizes went to Hanmi Research Center, represented in the photo by Research Director Jung Sung-youb, fourth from right; Go player Lee Se-dol, third from right; and Kim Dal-jin, an art archivist, second from right. Also in the photo are Hong Seok-hyun, chairman of the JoongAng Ilbo and JTBC, far left, and Lee Hong-koo, former prime minister and current chairman of the board of the Yumin Cultural Foundation, second from left. Standing at far right is SaKong Il, adviser to the JoongAng Ilbo. [KIM SEONG-RYONG]

This year’s Yumin Awards, a prize bestowed to Korea’s most talented and creative minds in the fields of science, society and culture, were granted on Monday at the Hoam Art Hall in central Seoul.

Go player Lee Se-dol, 33, who played a historic match against Google DeepMind’s artificial intelligence algorithm AlphaGo in March, was selected in recognition of his contributions to society.

The Hanmi Research Center, which recently developed a technology that prolongs a drug’s period of action called “Lapscovery” (Long Acting Protein/Peptide Discovery), was named the winner of the science category.

Kim Dal-jin, 61, an art archivist and director of the Kimdaljin Art Archives and Museum in Jongno District, central Seoul, was named the winner of the culture category for his wide and rare collection of Korean art history.

The Yumin Awards, established in 2010 by the nonprofit Yumin Cultural Foundation, annually commemorates Hong Jin-ki (1917-86), the co-founder and former chairman of the JoongAng Ilbo, and his emphasis on the role of creativity in society by selecting three winners every year, one in each category of social, scientific and cultural contributions. Yumin is an honorary title for the late chairman. Each winner receives 50 million won ($42,800) in prize money.

“The essence of Go,” Lee Se-dol said on Monday upon receiving his Yumin Award, “lies in the process [of the game], not the final result. The spirit of giving your best effort also counts tremendously.”

Lee, who scored a historic victory in the fourth of a five-game series against AlphaGo, stressed that his greatest accomplishment in the match was attracting public interest to the deep meaning of Go.

“It tossed up a really profound question of what creativity truly means,” Lee added.

Kim Dal-jin, the art archivist, vowed to record a richer sample of Korean arts in the future, contending that he would focus on digitalizing analogue data and improving user-friendly services for those interested in studying past artistic collections.

Jung Sung-youb, research director at the Hanmi Research Center, highlighted his colleagues’ perseverance, noting that the development of Lapscovery technology was based on 10 years of tireless effort.

Jung also thanked Hanmi Pharmaceuticals, with which the research center is affiliated, for investing a total of 900 billion won over the past 15 years, enabling its researchers to expand their boundaries.

Hong Seok-hyun, chairman of the JoongAng Ilbo and JTBC, congratulated the three winners in his remarks, pointing out that Hanmi Pharmaceuticals was able to reach trillions of won in overseas sales due to its latest research, while Lee proved to the world the significance of the fourth industrial revolution.

Kim was hailed for his effort to adapt Korean history in today’s era of big data.