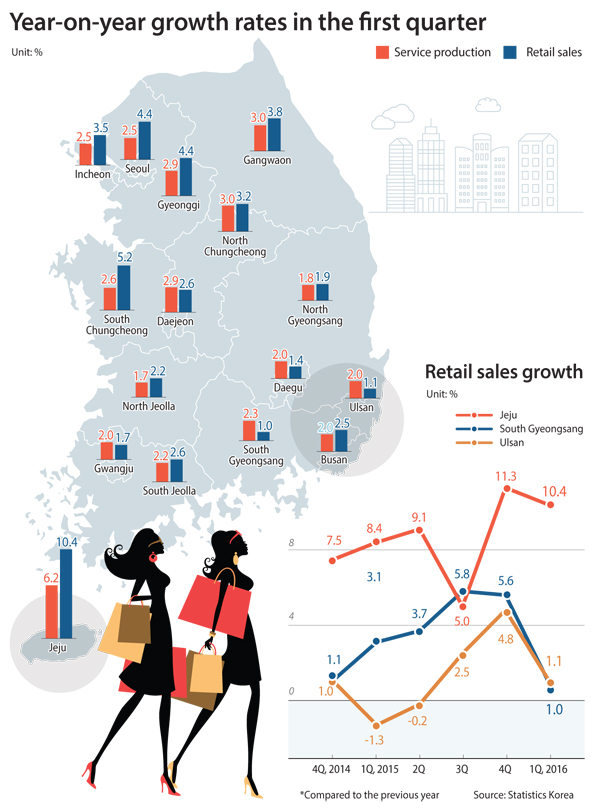 The southern resort island of Jeju has shown remarkable growth lately, especially in the service sector, where productivity is twice as high as the national average.

South Gyeongsang and Ulsan, meanwhile, where shipbuilding yards and shipping docks are heavily concentrated, reported the slowest growth in retail sales as the ongoing restructuring of the shipping industry has had a negative impact on the local economy.

According to Statistics Korea on Thursday, retail sales in South Gyeongsang and Ulsan only grew 1 percent in the first quarter, compared to the nation’s average of 4.5 percent.

The growth is much slower than the 5.6 percent reported for the fourth quarter of 2015 for South Gyeongsang or 4.8 percent for Ulsan. Department store sales in South Gyeongsang tumbled 7.2 percent while Ulsan dropped 2.2 percent.

“It is not certain whether they are affected by the weak shipbuilding and shipping industries,” said a representative at Statistics Korea, “but it appears the growth rate will continue to be sluggish in these regions for the next quarter.”

Retail sales increased the most in Jeju at 10.4 percent, which is nearly two times higher than the national average of 4.5 percent, while South Chungcheong scored 5.2 percent to come in second place.

In Jeju, sales at large discount stores rose 23.7 percent year-on-year. “For South Chungcheong, sales at car dealers helped it to grow faster than other regions in the nation,” said Sohn Eun-rak, a director at Statistics Korea. Indeed, the resort island showed the highest rate of growth in the service sector and in retail sales in the first quarter of this year.

Jeju’s service sector productivity rose 6.2 percent in the first quarter compared to the same quarter the previous year, according to Statistics Korea. This growth rate is more than twice the national average of 2.8 percent or that of Seoul at 2.5 percent. Statistics Korea said productivity growth rates were high in areas such as Jeju, North Chungcheong and Gangwon, as more financial and social welfare businesses moved in to the areas.

“Gyeonggi and Seoul increased by 2.9 percent and 2.5 percent each, but their rates were relatively small as the number of hospitality businesses and restaurants have decreased in the first quarter,” said Sohn.

Production growth in North Jeolla was the lowest in the nation at 1.7 percent. In North Jeolla, production in lodging, restaurants and education fell rapidly from a year earlier.

In all 16 major cities and provinces, both service sector productivity and retail sales increased in the first quarter of 2016.

Industry experts believe Jeju is over-performing in both productivity and sales growth rates as more Chinese are visiting or living on the island. In particular, Jeju’s real-estate sector rose 16.7 percent year-on-year in the first quarter, according to Statistics Korea. Its transportation sector rose by 16.3 percent and finance related business increased by 11.9 percent compared to the previous year.

Foreigners owned a total of 2,575 buildings on the island as of last year, a figure that has more than doubled within two and half years. Chinese accounted for 74 percent of foreign-owned buildings.

The number of Chinese tourists visiting Jeju has grown from 115,000 in 2005 to almost 3 million in 2014. More than 404,000 Chinese tourists entered the island through Jeju Airport in the first quarter.