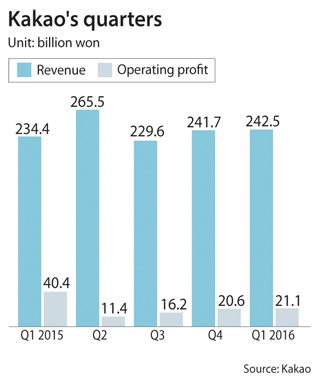 Kakao’s first-quarter operating profit was cut by nearly half from a year earlier to 21.1 billion won ($18.1 million), as its advertising and game businesses soured and the company spent heavily on launching new services.

Revenue in the January-March period managed to edge up 3.5 percent year on year to 242.5 billion won.

But the company’s advertising business saw its earnings tumble 11.1 percent over the same period. The decline reflects the termination of deals with a number of ad network partners, the company explained.

The earnings results were in sharp contrast with Kakao’s rival, Naver. The nation’s top portal service said on April 28 that its operating profit for the first three months of this year surged 32.1 percent to 256.8 billion won, and revenue rose 26.6 percent to 937.3 billion won on the back of robust mobile advertising.

Kakao’s chief financial officer, Choi Sae-hoon, said in a conference call on Thursday that the company expects to see revenue reach the mid-300 billion won range in the second quarter, when sales from Loen Entertainment, a top music streaming operator that it acquired in January, will be reflected.

What also brightens the outlook is a series of services that Kakao plans to launch soon. The company said during the conference call that it will launch Kakao Driver, a much-anticipated designated driver service, and Kakao Hairshop by June.

There are an estimated 120,000 to 150,000 designated drivers nationwide, and over 30 percent of them are expected to download the Kakao Driver app and register themselves for the service, according to Choi.

Kakao already links taxi drivers with customers through an app inspired by Uber. When Kakao Taxi started in March 2015, less than 10 percent, or 20,000 drivers, joined the service. But now, an estimated 220,000 drivers are using it.

The large number of users, though, didn’t translate into revenue, given the app did not charge extra fees for the hailing service. In contrast, the designated driver service, which will charge commissions on both customers and drivers, is set to finally contribute to Kakao’s earnings.

So is Kakao Hairshop, which connects users of the app with nearby hairdressers. It will also frequently offer discounts.

The company also unveiled plans to release two new offline-to-online services in the second half of this year.

One is called Kakao Homeclean, and the other is tentatively named Kakao Parking. The former connects users with housekeepers.

“The local home cleaning market has no clear pricing system, and recruiting is mostly done through acquaintances,” Kakao said in a press release.

“The discrepancy between supply and demand is huge in the market, and a standardized service and rational pricing structure has yet to be established. Kakao aims to create a rational and efficient system.”