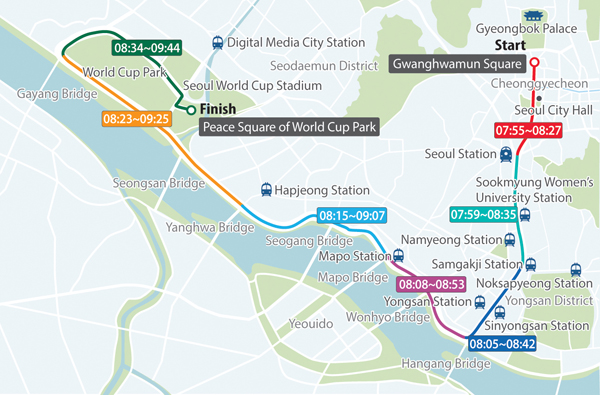 The 2016 Hi Seoul Bike Parade will kick off on Sunday morning at the Gwanghwamun Square.

The event, co-hosted by the Seoul Metropolitan Government, the JoongAng Ilbo and JTBC, will be joined by some 5,000 participants, who are scheduled to cycle 21 kilometers (13 miles) from central Seoul to World Cup Park in Mapo District, western Seoul.

With the parade, the Seoul city government hopes to encourage regular bike-riding among Seoul residents in order to help reduce greenhouse gas emissions. 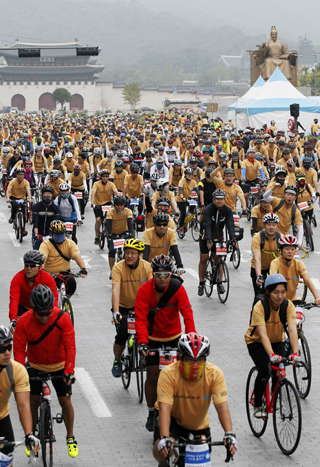 All participants are expected to gather at the Gwanghwamun Square by 7 a.m. on Sunday, and all are required to wear helmets. The cycling will begin after an hour of stretching.

As in the past, participants are divided by speed into three groups. They will ride through Sungnyemun, Seoul Station, Sookmyung Women’s University Station, Gangbyeon Expressway, and pass seven bridges along the Han River to get to the World Cup Park.

A 10-kilometer section of the Gangbyeon Expressway will be sealed off for the event, where the bikers will speed along the road with the Han River on their left.

Once the participants pass by the sixth bridge in the course, Seongsan Bridge, they will ride toward the northern part of Gayang Bridge, and this is when the last spurt of energy will be needed, as the road climbs uphill.

Passing the last hurdle, the bikers will turn right, passing the World Cup Park. This part of the course is popular among cyclists as they will be biking under the thick foliage of trees planted on both sides of the road.

Once arriving at the finish line, participants may enjoy giveaways from promotional booths at the park as well as celebratory performances by girl-groups including SixBomb.

The parade ends at 11:30 a.m. and participants can take the subway with their bikes or use the Hangang Park bike path to return home.
Traffic is restricted in sections of the course between 7:55 a.m. and 10 a.m. Further information is provided on the website http://www.hiseoulbike.com/.