Experience pays off for Mo, after a 10-year wait

Experience pays off for Mo, after a 10-year wait 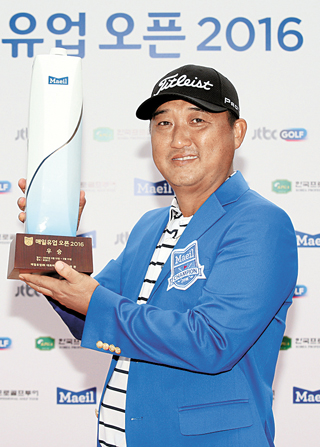 Korean professional golfer Mo Joong-kyung holds up his trophy after winning the Maeil Dairies Open 2016 Sunday with a 18-under 270 record. The 44-year-old golfer grabbed his first Korean Tour win in ten years. [NEWSIS]

During the third Korea Professional Golf Association (KPGA) tour event of the year, from May 12 to May 15, Mo demonstrated his experience as a 20-year pro veteran by showing tremendous self-control throughout the four rounds of the tournament.

Finishing the first round on Thursday tied at 18th with 3-under, Mo quickly climbed up in the leaderboard the next day after finishing the second round 5-under 67 to tie at fourth with 8-under 136 by the midway of the tournament.

On the third day of the tournament, he had another solid performance to wrap up the round four strokes under and finish second, one stroke behind then-leader Korean-Australian Doeun An, who’s went 5-under for the round. Mo’s steady rise peaked on the fourth day of the tournament on Sunday when he topped the leaderboard from early on.

With the local weather gusty and cloudy in Daejeon, the fourth round was a battle between the golfers and the wind that kept pushing the balls to the left and right in midair. However, Mo didn’t let the weather affect his game. In the first half of the fourth round, he grabbed four birdies at the first, fourth, fifth and eighth holes, while eagling the second hole to take the lead. Although he bogeyed the seventh hole, his performance in the second half of the tournament more than made up for the one over-par.

He went on to hit par at the remaining holes to the 18th, adding only a birdie at the 17th hole.

Forty-four-year-old Mo showed his veteran skills in the final few holes. At the 16th hole, he had a unsettling start, roughing his tee shot and subsequently failing to place the ball on the green in his second stroke. However, on the third stroke, he went with putting instead of an approach shot, which turned out to be a brilliant move as he was able land the ball near the hole to eventually nail the short par putt during the fourth stroke at the par-4 16th to maintain the lead. With only the 17th and 18th holes to go, there was a two-stroke difference between Mo and Kang Kyung-nam, who was the runner-up of the tournament. Kang finished the event three strokes behind Mo at 15-under 273.

During the 17th, Mo yet again failed to land his tee shot on the fairway, with the tee shot landing a few meters outside. His next shot seemed to be a tough one, with a bunker between the green and his ball. However, Mo calculated his shot carefully and went ahead with a 60-meter (196-foot) approach shot, landing the ball a few inches away from the hole to eventually card a birdie. Widening the lead with one extra stroke, Lee essentially guaranteed his win with the birdie on the 17th.

At the final hole, with the trophy all but his, Mo’s tee shot landed just outside the fairway. His second stroke went over the green but Mo went with a safe approach from beyond the green, landing the ball just a couple of meters away from the hole. Parring the 18th and the final hole of the tournament, Mo grabbed his Korean Tour win for the first time in 10 years.

Mo, born in 1971, made his debut as a pro in 1996 and had his first win in the same year during the Guam Open. Grabbing his first Korean Tour win four years later in 2000 during the Chungcheong Open, he continued with a solid first 10 years from then on. But his winning career came to a halt in 2006 when he had his last Korean Tour win at the SBS Gaya Open.

Last year, he was ranked 68th in the KPGA Money Rankings and lost his spot in the pro league. This meant he had to go through the Q-School again to re-enter the pro leagues.

Choi Jin-ho, the winner of the 12th Dongbu Insurance Promi Open on April 24, the opening event of the Korean Tour this year, finished third with 13-under.

While Mo enjoyed his moment in the KPGA, Jang Su-yeon had her second KLPGA win of the season during the NH Ladies Championship 2016 on Sunday at Suwon Country Club in Gyeonggi. She finished the first round on Friday tied at sixth at 4-under par and the second round on Saturday on-par. On Sunday, Jang played a bogey-free round with five birdies and one eagle to card 7-under for the round and 11-under 205 total to top the ninth KLPGA event of the year. Jang’s also won the Lotte Mart Women’s Open on April 10.