Protectionist wind from the U.S.

Protectionist wind from the U.S. 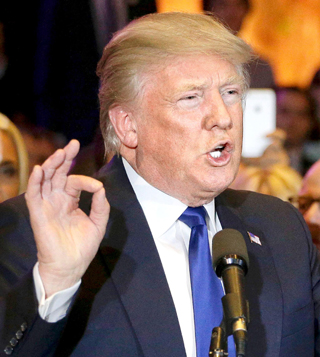 The U.S. presidential campaign is full of drama. Former governor of Alaska Sarah Palin “threatened” that she would help defeat House Speaker Paul Ryan in the next election. Having already pledged her support for Donald Trump, Palin pointed out how Ryan said he was not ready to endorse Trump. She claimed that Ryan was not respecting the will of the people who chose Trump.

The zeitgeist is the sum of voters’ will, and it will choose a leader and change society. Regrettably, the zeitgeist of the United States today is focused on trade protectionism. Free trade, which brought prosperity to America, is being attacked by both Republicans and Democrats.
As the Republican presidential candidate, Trump’s trade policy centers on higher tariffs and opposing free trade agreements. Voters’ support for Trump is fueled by the anger that free trade took away their jobs.

It is a short-sighted opinion to assume that the protectionism will subside if Trump loses. Former Secretary of State Hillary Clinton, the likely candidate for the Democratic Party, is considered to have good understanding of free trade. However, if Clinton wants to defeat Trump in the presidential election, she needs to convince the supporters of Sen. Bernie Sanders. Sanders has been opposing free trade agreements for decades.

In an article in the Huffington Post, he wrote, “Our trade agreement with South Korea has led to the loss of about 75,000 jobs. While bad trade agreements are not the only reason why manufacturing jobs in the U.S. have declined, they are an important factor.”

If Trump’s foreign policy is “America first,” Bernie Sanders’ economic policy can be summed up as “American jobs first.” They find the causes of U.S. economic challenges on the outside, not inside, and they have some common ground here. So some Sanders supporters say they would vote for Trump if Sanders doesn’t make it to the final round. In order to attract Sanders supporters, Clinton needs to add more protectionism to her economic policy.

And this is worrisome. No matter who becomes the next president, the United States will be quite different from the “protector of free trade,” bringing down various trade barriers. And the transformation would drastically change the direction of the global economy. Other countries will also veer toward trade protectionism.

One of the inevitable outcomes of protectionism is a decline in trade. Global trade is already shrinking. According to the World Trade Organization, global trade has decreased by 13 percent. Korea has been recording 16 consecutive months of negative trade growth, affected by the overall shrinking of international trade volume.