Korea debates the ‘right to be forgotten’

Korea debates the ‘right to be forgotten’ 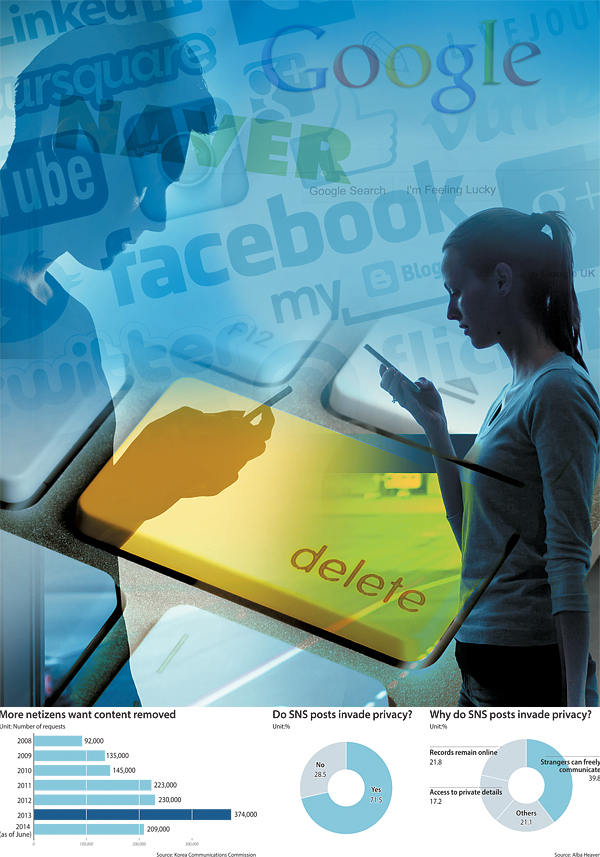 The discussion of a “right to be forgotten,” a concept that advocates individuals’ right to have online content deleted, inadvertently erupted in Korea when a popular rapper named MC Mong was embroiled in a military dodging scandal.

At the height of the controversy in 2010, net users found the singer’s web post on Jisik In, a Q&A platform on the web portal Naver, asking if he lost a certain number of teeth, whether he could be exempt from military service. The question, written in 2005, is still online since the portal website does not allow original posters to freely scrub their questions once they receive answers. Some said that the policy ensures the public’s right to know and maintains a free flow of information, while others claim that this amounts to a restriction of individual freedom.

But it was not until 2014 that the Korea Communications Commission (KCC), a media regulation agency, took further steps to discuss the concept, following the European Court of Justice’s landmark ruling for a right to be forgotten.

The result of years of consultations came in the form of a guideline last month, which will go into effect next month. But the guideline, though much anticipated, faces controversy for its blurry standards and lack of specific directions for implementation. Still, proponents support the notion of a right to be forgotten for purposes of privacy and personal dignity.

Unlike the decision by the European Union’s top court, the KCC’s guidelines primarily concern online users’ own posts rather than articles posted by a third party, since Korean law already grants people the right to request the deletion of information by a third party if it is deemed damaging to one’s reputation. And yet the guidelines seek to expand on the right to be forgotten, since it orders Internet companies to accept removal requests in some “exceptional cases” that formerly blocked or limited the original writer’s autonomy over their content.

“People sometimes face trouble accessing and deleting their own posts for different reasons,” said Choi Yoon-jeong, director of the privacy protection and ethics division at the KCC. “For instance, when a platform bans the deletion of a post by a user who has lost his or her ID or password. The guidelines are designed to ensure users’ rights under precisely these kinds of circumstances.”

The guidelines also describe occasions when an operator stops operating, but the site doesn’t give users the option to delete content beforehand. Also under the guidelines, all types of websites are subject to the new provisions, including gaming outlets, e-commerce sites and search engines (search engines should remove cached search results if a user asks for deletion).

Alongside the removal of information, the guidelines also recognize the right of individuals to take over online accounts previously operated by deceased relatives and remove them.

The set of directions is not legally binding, but Internet companies are paying heed to it due to the possibility that the right to be forgotten rule may be legalized in the future.

“Nothing has been decided yet,” Choi said, “But going forward, we will discuss legalization as we look at how the guidelines are adopted.”

The notable difference between the European Court of Justice’s decision and the KCC guidelines is that the latter encourages Internet companies to remove content if certain requirements are met, regardless of the posts’ content.

The right to be forgotten ruling, on the other hand, allows EU residents to request the removal of search results they deem outdated or irrelevant.

“Our advice is that websites should remove content upon request if the post is not closely related to the public interest,” said Choi, who is also a registered attorney.

But experts, and some Internet companies, said that the absence of specific criteria for removing content would have a chilling effect on public discourse and the free flow of information.

A briefing session designed to explain the guidelines to web operators last Tuesday was met with numerous complaints. Naver, the country’s largest web portal, with over 70 percent of the market share, was the most outspoken opponent to the guidelines, since its Jisik In service is heavily dependent on content produced by its community of users.

“The KCC should have come up with rational standards that can be agreed upon by service providers and users instead of merely outlining circumstantial qualifications required for the request,” Lee Jin-kyu, principal manager and leader of Naver’s privacy protection team, said during the seminar.

“We currently eliminate questions if a questioner tells us the question contains personal information. But with these guidelines, there can be reckless and arbitrary deletion of posts, and Jisik In’s identity as a collaborative information database, and the public’s right to information, will be put at risk,” Lee said.

Lee suggested that regulators come up with a multilayered system that can be applied on a business-by-business basis depending on the type of services that operators offer.

The KCC and online platform operators were also at loggerheads regarding scheduling, as participating companies said that it is asking too much for operators to comply with the rule by June, since they need to establish technical systems to carry out users’ removal requests.

“We need to set up new systems on our bulletin boards and additional staff members will be needed,” said Choi Byung-ho, deputy general manager of the security team at Interpark, an ecommerce site.

“The measure was announced at the end of April,” said a participating security officer at an online mall, who spoke on the condition of anonymity, “and we didn’t have enough time to develop all the necessary measures to follow the new rule. We need at least three to five months.”

The KCC, however, said that enough time had been given since the discussion of the right to be forgotten started two years ago.

When asked if websites have the autonomy to delete posts if a poster receives a reward from a site in return for writing a review or post, Choi of KCC said, “In that case, it appears that the websites have greater control of users’ posts.”

Lee countered that the portal site rewards posters for questions and answers, so it is entitled to greater control, but Choi of KCC said, “We are not able to fully weigh the matter.”

Global service providers, meanwhile, seem to be keeping their distance from the heated discussion. When asked how Google Korea will follow through with the guidelines, a spokesperson from the search engine company simply said, “We respect the guidelines.”

As for whether it can comply by June, the spokesperson declined to comment.

Facebook Korea said that the social networking site already respects the right to be forgotten by allowing users to decide the scope with which their posts are released. For the deceased, Facebook introduced the “legacy contact” service, allowing users to post on deceased users’ timelines.

Championing right to be forgotten

Choi Jin-hyung, a 30-year-old man, is among those who have long pursued greater freedom in controlling their digital legacy. Choi underwent a long and arduous process in order to delete his old online record.

Similarly, one 32-year-old man who attended the briefing session held by the KCC acknowledged the need to protect the right to be forgotten.

“I believe that the KCC’s general direction to respect the right to be forgotten is the right move,” said the man, who declined to be named. “But hearing the KCC’s briefing, I felt that the agency should address the blurry areas that are not fully covered by the guidelines.”

According to a survey by the National Information Society Agency in 2014, 64.8 percent of respondents weighed privacy over the right to knowledge or freedom of expression.

Legal experts feel that the guidelines have failed to present clear principles, leading to the complaints by platform operators and online users.

“When discussing the right to be forgotten issue,” said Ko Hwan-kyoung, a partner at the Seoul-based law firm Lee & Ko, “[justice bodies] should carefully analyze the context of a certain country with the goal of balancing the individual’s right to privacy with considerations of the public’s right to information.”

“It is unclear,” he added, “whether sufficient deliberation was taken in this respect when the KCC drew up the guidelines.”

Other experts have noted that the guidelines were drawn up from the perspective of protecting intellectual property rights rather than individual privacy.

“Outside Korea, the right to be forgotten is aimed at giving people the chance to rebuild their reputations, unhindered by past online records,” said Park Kyung-sin, a law professor at Korea University and a board member of Opennet, an organization advocating freedom of expression. “But in Korea, the guideline is more like consumer protection for registered users of content-hosting services. Many experts, therefore, find it odd that the government continues to call it the ‘right to be forgotten.’”

Park added that the government should make it clear where the focus lies - whether it is a matter of broad consumer protection or privacy protection. He acknowledged that collaborative services like Jisik In could find the current guidelines unfair.

“Considering the features of Jisik In,” he said, “it could be seen as unfair to Naver if they are required to delete all posts according to requests.”

Park also suggested that the guidelines offer flexible options to preserve content while protecting the identity of users.

“One way is to provide paraphrased versions of questions, or to hide IDs if an original poster asks for deletion.”