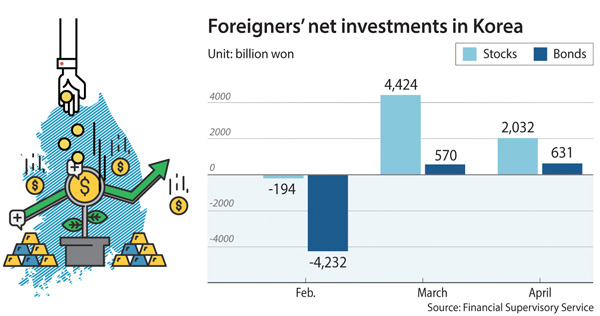 According to Financial Supervisory Service (FSS) data on Monday, foreigners’ April net purchase volume was estimated to be 2.6 trillion won ($2.2 billion), about half of the 4.4 trillion won in March.

With the 2 trillion won net buying spree, foreigners became owners of 28.8 percent of the total market capitalization in both the Kospi and Kosdaq.

The U.S. and European nations were net buyers of Korean stocks, each gulping up stocks worth 1.1 trillion won and 2.3 trillion won, while Middle East nations and some Asian countries pulled out 1.2 trillion won and 500 billion won, respectively, due to the lingering impact of low crude and raw material prices.

By country, the United States was the largest net buyer of Korean stocks, followed by United Kingdom’s 800 billion won.

Stable credit ratings of the bonds, high liquidity in the local capital market, and stable FX reserves are the main attractions for long-term investors in Korean financial products like Switzerland, Kang said.

Analysts said foreigners continued to purchase local stocks because they were betting on the Korean central bank cutting interest rates.

“The foreigners’ purchase volume won’t dramatically grow in the coming months as the proportion has already hit its max,” Kang said. “But the purchasing trend will last as BOK Gov. Lee Ju-yeol made comments at the monetary policy committee meeting on Friday that he wants to leave the possibility of rate cuts open.”