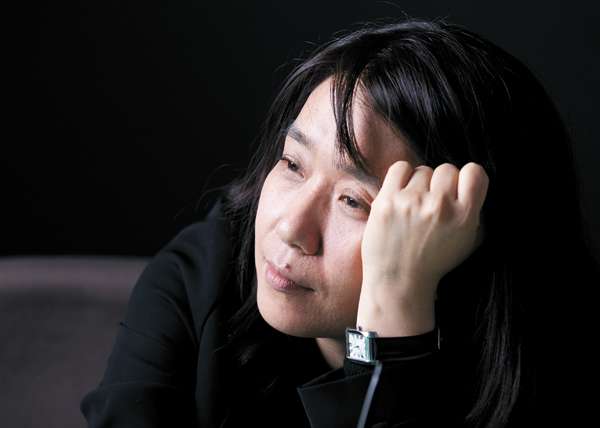 Han Kang reluctantly opens up about novelHan Kang’s “The Vegetarian” won the 2016 Man Booker International Prize. The novel is about a woman who tries to become a plant in response to human violence. [KWON HYUK-JAE]

Despite the fact that her novel has attracted a great deal of attention recently, especially after it was nominated for the award, Han did not seem entirely comfortable with the buzz surrounding her work.

Before her interview with the JoongAng Ilbo, which took place late last month, she took several days to reply to the interview request, which she said was due to the pressure she felt about “The Vegetarian.”

The novel consists of three short novels, “The Vegetarian,” “Mongol Spot” and “Tree Spark,” in which a different character narrates the story of the protagonist, Young-hye. 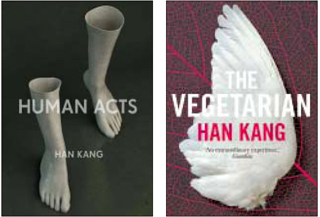 While “The Vegetarian” has gotten much international recognition, Kang’s latest book, “Human Acts,” is about the atrocities of the Gwangju democratization movement in 1980. [HAN KANG OFFICIAL WEBSITE]

Out of the three, “Mongol Spot” won the 29th Yi Sang Literary Award. As “Mongol Spot” include a sexual incident that happens to Young-hye, Han seems cautious when discussing it. Often, she says, readers emphasize the sexual elements, therefore leading to misapprehension about the original message.

Q. What makes you feel uncomfortable in the wake of the extraordinary attention toward “The Vegetarian?”

A. After releasing the book through Changbi Publishers in 2004, I got a letter from a reader who said the book makes people feel ill [because the content is inappropriate.] In particular, “Mongol Spot” caused the most misunderstanding.

It was widely read by people because it won the Yi Sang Literary Award, and the single book was published as part of the book that included award-winning novels; and a lot of people felt it was focused more on eroticism. The publishing company was promoting the book, highlighting the sexual elements to sell more.

I was hurt then and later became fatigued by it. When the three short books were published in 2007 together in novel form, I did not actively engage in interviews on the book. I was worried that this novel could be misunderstood. I thought I would be rid of these concerns as time passed by, yet I think that there could be another round of misunderstanding now that this novel is gaining so much attention.

Can you tell us more about “The Vegetarian,” which many people call very intense and unique?

I designed the novel to be different when the short stories are read independently and when they are read together as a whole. Readers may perceive this novel as odd when they read each one separately, yet they can find the context after reading all of them.

The protagonist of the novel, Young-hye, doesn’t speak for herself as a narrator. Instead, she only exists as the subject of hate, misunderstanding, desire, pity and peculiar sympathy by the three narrators of the trilogy, who view her from their own perspectives.

I hoped that readers can find the truth of Young-hye amid the ringing misconceptions toward her, using their imaginations. In this sense, I would say that the whole story is actually a question - a question of 200 pages. It is not a difficult novel if we consider it a big question. I try to work around the questions that are not easy, that are uncomfortable or agonizing to ask. For me, writing is the way to do it.


Which question did you want to pose?

Young-hye tries to resist eating animal-based food, which symbolizes human violence. At last, she considers herself not as a human being but as a plant, refusing every kind of food.

Through her, I wanted to raise a question about human violence and innocence. That is, I wanted to ask if it is possible for a human to completely reject any kind of violence and become a flawless, innocent being. This question rang my mind.

Young-hye eventually chose to destroy herself.

What do you think about the criticism that the novel portrays a passive image of women?

I don’t agree with that. She is a person who tries to root out the problem, resisting her existence as a human and tears herself away from the rest of the world; she has strong determination to do it. She struggles to rescue herself, but ironically she is getting closer to death at the same time in reality.

The one who has a similar perspective as me as a writer is Young-hye’s sister, In-hye. She tries to face the situation and feels agony. She tries hard to make Young-hye survive - and this is how I wrote this novel. Because of this, I ended this novel by describing In-hye looking out of the ambulance rather than directly mentioning her death.


How do you think about the translation done by Deborah Smith, which is considered to deliver the original message effectively?

I think that tone is very important when writing a book. Smith had the same idea, so we could make good synergy.

I tried to be poetic in the part when Young-hye gives a monologue. I was surprised that Smith caught the tone precisely.

What is the significance of the Man Booker International Prize award?

I am a writer who writes quietly without any commercial or popular aspects. Luckily, I met a great editor and translator.

However, I think that this luck will become more familiar for Korean writers, because there are too many of my fellow writers who silently write great works.