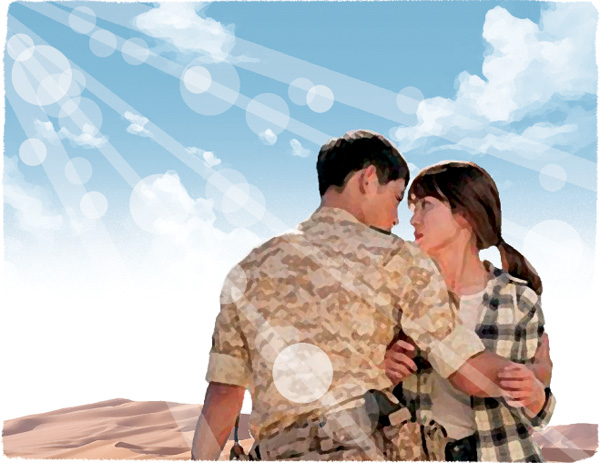 As KBS drama “Descendants of the Sun” has become a major hit, Koreans are hoping for a revival of Korean Wave television dramas.
The series involving romance in an overseas peacekeeping mission ended with 38 percent viewership, a long-awaited success since “My Love from the Star” (2013-14). The broadcaster enjoyed elevated brand value thanks to the popularity of the series.

Movie production and distribution company NEW set up a joint venture, Descendants of the Sun LLC, with KBS and participated in its first television drama production. It also broke the common belief that pre-produced series usually flop. According to NEW, it has neared 14.3 billion won ($12.2 million) in revenue, exceeding the 13 billion won production cost. It is expected to make tens of billions of won in profit from exporting the show to more than 30 countries and selling merchandise.

The cast members have become international stars, and people are imitating the drama characters’ military way of talking. Many politicians have parodied the drama for PR purposes. The success reignited the Korean Wave and has led to a series of questions about how to maintain the boom.

The success of “Descendants of the Sun” confirmed that there are six elements required for a series to be successful with Korean Wave content. Considering the high-risk, high-earning nature of the cultural industry and the cultural discount factor, a series that is based on the formula can appeal to fans. The six elements are competitive original content, influential stars, competitive planning and production, reflection of trends and preferences of users, strategic marketing, programming in other channels, and responses to other variables.

According to the production company, “Descendants of the Sun” was originally meant for the domestic audience only. But the pre-production showed solid development, and the producers gained confidence that it would work for international distribution. Screenwriter Kim Won-suk won a contest with the original script, and writer Kim Eun-sook, who is known for her work in romance, collaborated to make the story more gripping.

Their reputation in the film industry helped the production company raise funding. Risk was hedged by selecting top stars. It was also a wise tactic to choose an online site as a Chinese partner, as it is exempted from a pre-censorship review that takes at least six months. It was also lucky that other channels did not have a strong lineup.

The show also left a message that the Korean Wave can only be revived when various projects are developed, the system is reformed and the drama industry becomes stable. The market will diversify and grow when projects that have high artistic and experimental value contain Korean elements or when universal plots are developed simultaneously. There are no rules and regulations for the Korean drama market, and it is not healthy enough to guarantee continued success. Networks program two dramas every night and struggle to secure funding and advertising with no guarantee for success.

The networks often avoid pre-production in order to boost ratings, and if the first few episodes don’t have high ratings, the scripts are changed to add provocative ideas. Writers and production staff are pressured and stressed, and actors struggle with last-minute changes in the plot and cannot bring out artistic interpretation. “Descendants of the Sun” was no exception in product placement, and as the stars of the show are paid substantially, other characters need to be eliminated or minimized, and actors in supporting and smaller roles struggle financially.

Broadcasters, production companies, writers and actors need to stop fighting for influence and power, and work together to agree on an appropriate number of dramas, use of production budget, limits on pay for actors and the complete pre-production system. Companies should also help the market by directly investing on projects rather than relying on exposure through product placement.

There is a lot to be done by the government as well. As the government advocates cultural prosperity, it should provide more organized support for the Korean Wave. Information on export partners needs to be collected and distributed, and regulations and reviews should be eased. Administrative and diplomatic efforts should be made to enhance cultural exchanges. An appropriate environment needs to be created to help export Korean Wave content.

The government also needs to meticulously study the situation in different countries. For example, China’s preliminary screening is said to protect cultural sovereignty and profits. But Chinese authorities are concerned that the Chinese people may be influenced by Korean dramas’ frequent commercial exposure and unethical content. Moreover, China has announced it would also review online dramas as well.

The Korean government needs to respond more carefully. The effects of the Korean Wave lead to quadrupled sales in cultural products. In order to expand the boundaries of the Korean Wave, cultural, foreign and trade ministries should create a consultative body with broadcasters, production companies and investors to seek mutual interests. The Korean Wave cannot be revived only with the efforts of one entity.


*The author is a professor of acting for visual media at Sungshin Women’s University.