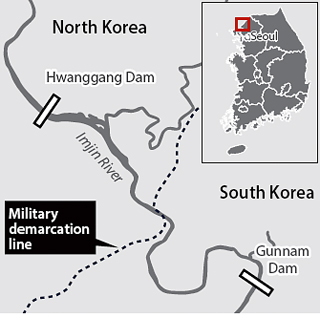 Residents in border areas in Gyeonggi saw an unexpected flood Monday night apparently because North Korea’s unannounced release of water from its border-area dam increased the inflow of water to the South from 97 tons per second at 6 p.m. to 428 tons per second by 9 p.m.

According to the Paju city government and Korea Water Resources Corporation, the inflow of water from across the border at the upper stream of Imjin River, where water levels are controlled by the Gunnam Dam. The inflow of water hit 515 tons per second by 4 a.m. Tuesday, from which point it began to gradually subdue.

Officials view the dramatic increase of water inflow as a direct result of the North’s unexpected release of water from its Hwanggang Dam, located about 30 kilometers (18.6 miles) north of the military demarcation line, as there had been no rainfall in recent days in the area.

Facing the sudden increase in water levels, the Gunnam Dam increased the amount of water it released to 427 tons per second at 1 a.m. from 116 tons per second at 7 p.m. The increased level of water was a problem for fishermen who make their living along the Imjin River, as their fishing nets were damaged or lost in the flood.

“I have lost fishing nets and tools worth about 7 million won [$5,955],” said Lee Sun-chan, “They were all swept away in the flood.” Lee said although he received a text message from authorities warning them of an increase in the water level due to the accelerated outflow of water from Gunnam Dam at 12:50 a.m. Tuesday, he and other fishermen did not have enough time to retrieve their nets.

“It is estimated around 100 fishermen in Paju have suffered damage from the flood,” said Jang Seok-jin, another fisherman, “with the loss of their properties worth hundreds of millions of won.”

Affected residents blame authorities for having failed to contain the sudden inflow of water long enough for them to retrieve their fishing tools. They said they were not ruling out legal action against the government if they feel compensation falls short.

Kim Jae-hwan, a management official for Gunnam Dam, said the rapid water level increase was due to North Korea’s dumping of water without notifying South Korean officials beforehand. Kim said the dam had to release the water into the Imjin River because it was already been storing 13 million tons of water, which was scheduled for release on June 20 for farming purposes.

North Korea watchers have called for an agreement with Pyongyang that would require it to notify Seoul of its planned releases of water in advance. In fact, North Korea consented to issue prior notice before dumping water from Hwanggang Dam in October 2009, one month after six South Koreans were killed in a flash flood that was the result of the North’s sudden release of water. To prevent flood-caused damage in downstream areas in Yeoncheon County and Paju in Gyeonggi, South Korea built the Gunnam Dam for flood control purposes in 2010.