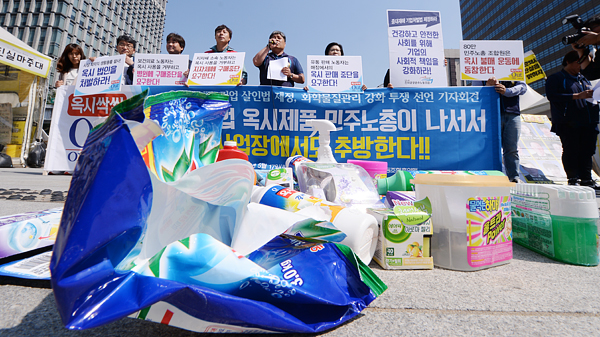 Members of the Korean Confederation of Trade Unions protest against Oxy Reckitt Benckiser at a press conference next to the statute of Admiral Yi Sun-sin in Gwangwhamun square, central Seoul, on Tuesday. [NEWSIS]

A 40-year-old housewife picks up a fabric softener package, carefully reads through all the ingredients written on the back and then replaces it on the shelf. She repeats this numerous times until eventually leaving the aisle empty-handed.

“I used to buy products from conglomerates without a second thought,” says Kim Bo-mi, a mother of two. “But after Oxy’s humidifier sterilizer scandal, I make sure to check all the ingredients before I buy anything.”

“When I come to buy things, Oxy products are immediately ruled out,” says Park Ok-bun, 60, who came grocery shopping with her daughter. “I’m thinking of changing all the chemical products I use to eco-friendly ones. I heard somewhere that you can make air fresheners with cinnamon, so I’m planning on doing that with my daughter.”

Consumers like Kim and Park, who refuse to buy chemical products and instead purchase environmentally-friendly or natural products, have increased in number since the outbreak of the humidifier sterilizer scandal that killed or made hundreds of people sick. Such consumers are referred to as No-chemi people, a portmanteau of “no” and “chemicals.”

According to the online shopping mall Auction, from early April to early May 2016, sales of eco-friendly laundry detergents have risen 168 percent while those of environmentally-friendly dishwashing detergents have increased 78 percent.

The sales of baking soda and citric acid, which can be used as detergents and deodorizers, have increased 45 percent.

No-chemi people also often use online cafes and mobile applications to share information about the chemical composition of daily products, as well as nature-friendly alternatives that can be used to replace them.

“I’ve decided not to use products from Oxy anymore,” wrote an online user on an internet cafe in early May. “Please let me know alternatives that I can use to wash discolored towels or underwear.”

Many of the comments below the post suggested using baking soda.

A Korean mobile application called Hwahae, where users can look up the chemical ingredients of cosmetic products as well as their lethality, has become popular. The cumulative number of downloads of this app has reached over 2 million.

“After the Oxy humidifier sterilizer scandal,” said Jung Seon-hye, 27, a nurse at a hospital in Seoul, “I use the Hwahae app to search the chemical composition of cosmetic products before I buy them. I think there’s no other way but to take care of my own safety.”

“It’s difficult to know the exact level of danger of certain chemical products,” said Lee Jun-young, a professor at Sangmyung University’s department of consumerism. “So, once consumers become doubtful of a certain product or brand, that’s the beginning of the end.”