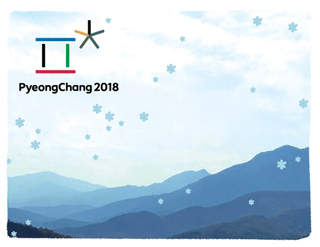 In 2015, many Koreans recalled the old days with the television show “Reply 1988.” The generation born in the 1970s and 1980s had a chance to look back on the period in which the drama was set.

The year 1988 was also when Korea hosted its first Olympic games. “From Seoul to the world, and from the world to Seoul,” Koreans united and cheered for athletes competing in the Olympics. The athletes’ endeavors and sportsmanship impressed viewers. Through hosting the Olympics, Koreans experienced the virtue and legacy of the Games, bringing people and the world together.

Thirty years later, in 2018, another generation will host the PyeongChang Winter Olympics. More than 50,000 athletes and officials from over 100 countries will participate, and more than two million visitors are expected to attend. Broadcasters and foreign press will show the beautiful scenery of Pyeongchang County in Gangwon and the spectacular performances of the athletes to the world.

Analysts predict the economic impact of the Winter Olympics is an estimated 64.9 trillion won ($54.5 billion). The process of preparing for the Olympics creates economic effects, and the legacy of the Games in the region after the event will bring new growth engines and create new jobs.

After the Winter Olympics, Korea will become the sixth country to host four major international sporting events. The experiences will be the foundation of becoming a sporting power and elevate the reputation and national status of Korea.

Pyeongchang is busy preparing for the event. A total of 11.5 billion won has been invested on constructing stadiums, access roads, accommodations, an Olympic plaza and other facilities. Once the 12 stadiums are built and the 122-kilometer (76-mile) Wonju-Gangneung railway opens, it will take one hour to travel from the capital region to Pyeongchang and 90 minutes from Incheon International Airport.

Sixteen access roads to stadiums and pavement construction on regional and national highways will provide convenient access for athletes and visitors.

All related facilities will be completed and approved before February 2018. Additional urban environment improvement projects around the stadiums, and various tourism infrastructure and cultural projects are also in progress. The region is getting ready to welcome visitors by nurturing citizenship, improving service quality in the hospitality industry and promoting volunteerism.

Pyeongchang is working hard to use the Olympics as an opportunity to transform into a world-class city.

The city is paying special attention to utilizing stadium facilities after the event. In order to host the Olympics, 12 stadiums are needed. Six existing stadiums are being used as is or with modifications. Six additional stadiums have been built, and post-event uses for four of them have already been determined. The authorities are working to finalize utilization of the remaining two. After the Olympics, the facilities are to be used as leisure facilities for the public and as training facilities for national and professional teams.

The Olympics will leave a great legacy for the society, culture and economy of the region and country. Pyeongchang has contributed to the expansion of winter sports to countries with no snow and ice through the Dream Program and will continue to create a special legacy in winter sports. The PyeongChang Olympics slogan is “Passion, Connected,” and the Olympic Games will provide opportunities for new challenges, and be an inspiration to young people and lift the hopes of Koreans in an era of low growth.

To enjoy the effects of the Olympics and leave a sustainable legacy, national interest and participation are necessary. The Olympics must not be a regional event held amid the indifference of the people. The PyeongChang Winter Olympics is a global event hosted in Korea. The central government, National Assembly, public agencies, media and private companies should help create the Olympic boom and work for a successful event. Every grain of sand makes a sand castle. Small contributions and wisdom will make the Olympics a great success.

The Games will leave a special and great legacy for the Republic of Korea, just as the 1988 Seoul Olympics brought joy, inspiration and pride to the people who were struggling in difficult times. Pyeongchang asks for the wholehearted support and participation of all Koreans.


*The author is the mayor of Pyeongchang County in Gangwon.