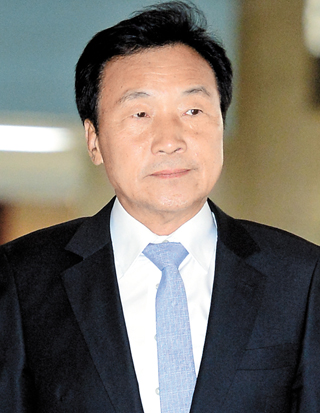 Sohn Hak-kyu, former adviser to the main opposition Minjoo Party of Korea, said Wednesday that he will return to active politics. [NEWSIS]

As the ruling Saenuri Party descends into a vicious intraparty fight, signs of a major restructuring of the political arena loomed Wednesday.

The conservative party has long suffered from an internal schism between loyalists of President Park Geun-hye and non-loyalists.

The civil war reached a new peak on Wednesday, as loyalists openly discussed the possibility of breaking up the party after rejecting a plan proposed by Park’s adversaries to reinvent the party.

“If a monk doesn’t like a temple, he leaves,” Rep. Kim Tae-heum, a key member of the faction loyal to President Park, said Wednesday, quoting an old Korean saying.

“If those who are not in our faction want to leave, they should,” another Park loyalist said. “We have nothing to lose.”

After a humiliating defeat in the April general election, the Saenuri Party elected Chung Jin-suk as its new floor leader. On Tuesday, the party scheduled meetings of the standing national committee and national committee to formally appoint Chung as the party’s acting chairman and pass a revision to the party constitution to launch an innovation committee. Rep. Kim Yong-tae, a reformist, had been selected to head the reform initiative.

The meetings of senior party members, however, did not take place because neither had enough members to meet a quorum. Park loyalists deliberately discouraged members of the standing national committee and national committee from attending the sessions, sources said.

Both Chung and Kim are known as outsiders to the Park faction.

After the meetings failed, Kim declared he would not head the innovation committee. “Today, democracy died in the Saenuri Party,” Kim said. “I will go down on my knees before the people, but I will never do so before [Park loyalists].”

“Five lawmakers loyal to Park made phone calls Monday night to discourage participants,” Rep. Lee Hye-hoon said. Of the 52-member permanent standing committee, only 16 attended. Many of the 37 absentees were loyalists to the president.

Park loyalists denied they organized a boycott, but did not deny they have no intention of working with Park adversaries.

“If we will have to split, we will split,” a Park loyalist told the JoongAng Ilbo on the condition of anonymity. “If the Park adversaries leave the party, it’s even better. We are not afraid of their leaving.”

He added that members who think the party needs to change completely should leave and create a party of their own. “Chung and Kim had their first meeting and overtly criticized the Blue House,” he said. “We decided to act because we can no longer allow them to openly fire at the party.”

Another Park loyalist complained that the Saenuri Party’s crisis was caused by Chung. “Chung made unilateral decisions to form an interim leadership and the innovation committee,” he said. “It is a betrayal of the Park loyalists who supported him to become the new floor leader.”

After losing the general election on April 13, all members of the ruling party’s leadership stepped down, and Chung was elected the new floor leader, largely based on the Park loyalists’ support. But they expressed displeasure with Chung for having created an interim leadership without allocating enough power to the Park faction.

Of the 122 lawmakers-elect of the Saenuri Party, about 70 are considered Park loyalists. If there is a formal schism, the president’s party will shrink dramatically.

The situation is similar to the Uri Party, which started with 152 lawmakers in 2004 but lost dozens of members in the following years.

By 2007, toward the end of the Roh Moo-hyun administration, the ruling party only occupied 73 seats. At the time, Roh’s party struggled to pass bills and failed to win the next presidential election.

Park loyalists are clearly aware of their possible loss but still support the idea of a divorce from Park’s adversaries. “We should be judged for the merits and demerits of the president that we produced,” Rep. Kim said.

Before the April general election. Park loyalists argued nominations should only be given to candidates with the same philosophy as the president. Based on that, many of her opponents were denied Saenuri tickets.

While Park loyalists largely supported Chung as the new floor leader, his attempts to reinvent the party apparently disturbed them. Chung formed an interim leadership on Sunday with mainly Park adversaries. The interim leadership wasted no time to challenge the president.

On Monday, it asked the Park administration to reconsider its rejection of liberals’ demand that a controversial song be required to be sung at a May 18 Democratization Movement anniversary ceremony. The leadership also discussed the need to reinstate independent lawmakers-elect who were denied Saenuri tickets in the election.

As the internal war intensified, Rep. Chung Woo-taik, a senior lawmaker who has amicable ties with the Park faction, lamented the situation. “I am afraid that the Park adversaries will leave the party en masse and create a new party,” he said. “I am afraid the rumor of a major reshuffle in the political arena may be realized.”

The rumor Chung refers to says the Saenuri Party will be split between Park loyalists and their opponents.

With the main opposition Minjoo Party of Korea and the People’s Party, the political arena will be controlled by four major parties by the end of this year. Political observers speculate that the two parties in the middle of the political spectrum will merge before next year’s presidential election to appeal to the moderate voters fed up with conventional politics.

Those two parties would probably be breakaways from the Saenuri Party and the People’s Party.

Fueling the speculation, a retired heavyweight on Wednesday declared his intention to return to politics.

“I will take the lead to create a new layout by deeply thinking about the outcome of the general election and reflecting the people’s rage and frustration,” Sohn Hak-kyu, former adviser to the main opposition Minjoo Party of Korea, said Wednesday.

The former Gyeonggi governor, who in 2007 flirted with a presidential bid with the Grand National Party, the predecessor of the Saenuri Party, joined the liberal opposition party, now the Minjoo Party, in 2008. He served the largest opposition party twice as chairman, but retired from politics after losing a by-election in 2014.

Sohn made the remark at a luncheon with supporters. About 300 people attended the event, and some of them said they want to make Sohn the president in 2017.

Liberals welcomed Sohn’s remark. “I hope he will join our party,” said Park Jie-won, floor leader of the People’s Party. “We will keep sending him love calls.”