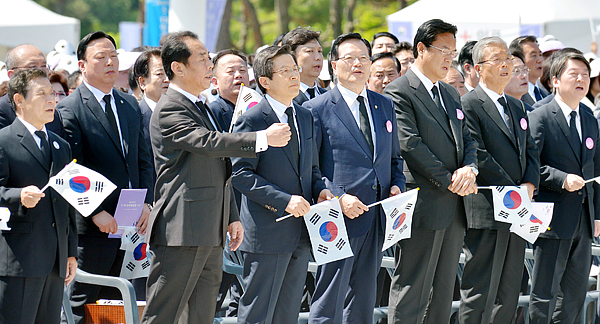 Participants in a ceremony to commemorate the May 18, 1980, democratic uprising sing “March of the Beloved” at the May 18th National Cemetery in Gwangju on Wednesday. President Park Geun-hye did not attend the ceremony, and Prime Minister Hwang Kyo-ahn, who represented the administration at the ceremony, did not sing the controversial song. [NEWSIS]

A ceremony to commemorate the May 18, 1980, democratic uprising took place Wednesday in Gwangju, but the decades-old division between conservatives and liberals remained unresolved.

The government sponsored a ceremony to mark the 36th anniversary of the democratization movement at the May 18th National Cemetery in Gwangju. The 3,000 participants included the families of protestors killed by military forces during the 1980 uprising. Top government officials and high-profile politicians also attended.

“The Ministry of Patriots and Veterans Affairs is hosting the event, and the prime minister will represent the administration at the ceremony,” said Jung Youn-kuk, a presidential spokesman. Park sent a flower arrangement.

Floor leader Chung Jin-suk of the conservative Saenuri Party attended the commemoration, as well as leaders of the liberal Minjoo Party of Korea and the People’s Party.

The ceremony lasted about 20 minutes and included a performance of the controversial song “March of the Beloved.” While victims’ relatives and liberal political parties demanded the song be designated an official theme song of the anniversary - and that the government require participants to sing it - the Park administration refused. The Ministry of Patriots and Veterans Affairs announced Monday that the song would be performed by a chorus, and participants would be free to sing if they wish, but it wouldn’t be a requirement.

Furious about the decision, victims’ relatives blocked Park Sung-choon, the minister of patriots and veterans affairs, from entering the ceremony on Wednesday. A brief melee took place between the relatives and Park’s security guards.

“Veterans associations opposed mandatory singing of the song at the ceremony,” said Park, a retired general who has been heading the ministry since 2011, “so the ministry could not require it. The ministry represents the veterans.”

He also said the decision was not his personal choice and that it was regretful the families tried to stop him from attending the ceremony.

The song was written in 1982 for a posthumous wedding ceremony of two protestors killed by military forces during the 1980 Gwangju uprising. Hundreds of civilians were estimated to have died in the suppression of the uprising against the authoritarian Chun Doo Hwan regime. “March of the Beloved” has become an anthem for democracy activists for decades. Fueling the controversy over the song, North Korea in 1991 used it as background music for a film.

In 1997, the government designated May 18 an official commemoration day for the democracy movement. Until 2008, singing the song was required during the state-sponsored ceremony. Some conservative groups complained it was inappropriate for top government officials, including the president and prime minister, to sing it because of its apparent link to North Korea.

The government decided in 2011 that the song would be performed by a chorus during the main ceremony, and participants would be allowed to sing along if they so wished. The ministry reaffirmed the protocol on Monday, despite liberal leaders’ direct appeals to the president during their Blue House meeting on Friday.

As the song was performed by the chorus during Wednesday’s ceremony, Prime Minister Hwang and presidential senior secretary Hyun stood up but did not sing. Leaders of the Minjoo Party and People’s Party sang along. Saenuri floor leader Chung as well as National Assembly Speaker Chung Ui-hwa also sang.