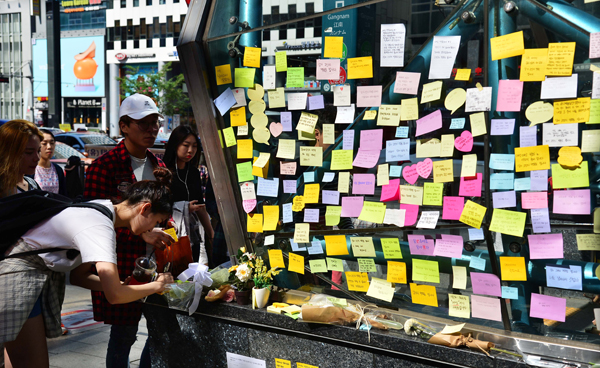 At Exit 10 of Gangnam Station, passersby leave messages of condolence after the murder of a 23-year-old woman by a stranger in a bathroom near the station. [NEWSIS]

Mass public mourning of a 23-year-old woman who was fatally stabbed by a stranger in a bathroom near Gangnam Station, southern Seoul, on Tuesday, sparked a rallying call against misogyny across the nation.

Politicians visited the impromptu mourning site, which was proposed by a Twitter user that went viral Wednesday, to pay their condolences. Moon Jae-in, the former chairman of the Minjoo Party visited the station Wednesday morning unaccompanied by aides. On Thursday, Cho Eun-hee, head of the Seocho District Office, and Park Won-soon, Seoul mayor, visited the site as well.

“I will preserve the mourning site as well as the memory of the tragic event,” wrote Park on Twitter. “I’ll try to heal the world into a place where there will be no more killings due to anger and hatred.” 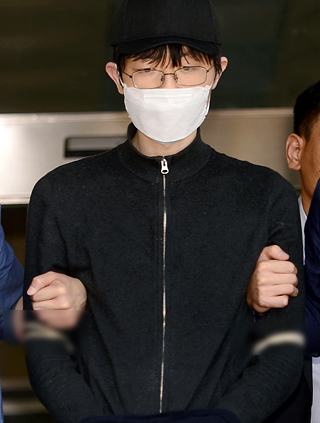 The 34-year-old suspect accused of stabbing a woman to death Tuesday leaves the Seocho District Police Department to be moved to the Seoul Central District Court for a hearing on Thursday. [NEWSIS]

After the police announced Tuesday that the 34-year-old suspect, a homeless man surnamed Kim, admitted that he didn’t know the victim but killed her out of vengeance against women in general for looking down on him, misogyny in Korea became a trending topic online and in the Post-its at Gangnam Station.

“The remaining women who live on will try to make the world into a better place,” read a Post-it at Exit 10. Another one read, “I’m sorry. Yet again, I am allowed to live in this hellish world and not be killed because I’m a man.”

The suspect stabbed the victim multiple times at 1:00 a.m. on Tuesday after she came into a bathroom used by patrons of a bar. The victim was at the bar with her friends and boyfriend. Her boyfriend discovered her body a few minutes later.

Kim was caught by police wandering around the streets of Seocho District. According to the police, he had left his home in March 2016 after a dispute with his father and had been living on the streets and sleeping in stairways of buildings in Gangnam.

The Seoul Central District Court issued a detention warrant against Kim after a hearing Thursday.

A Twitter account, @0517am1, was created on Wednesday in order to raise awareness of the murder case. “A 23-year-old woman was murdered for no reason near the red-light district in Gangnam,” read a post from the account. “Please pay attention to this case so it’s not forgotten.”

Similar comments were posted on Megalia, a feminist website.

“The victim is a girl the same age as me,” wrote a member of the website. “She was killed simply because she’s a woman. We won’t forget your death, rest in peace.”

“This case isn’t anything new,” said Song Ran-hee, head of the Korea Women’s Hot Line. “It could be seen as a regular event in Korea, where gender inequality and hatred of women is prevalent.”

“We pay our condolences to the victim of the Gangnam Station murder case,” wrote the Korean Women’s Association United on its official website. “We will fight off violence and hatred against women to the end.”

Nonetheless, controversy is arriving over the claim that the murder was all about misogyny.

The police were reluctant to label it a hate crime against women after finding that the culprit had been diagnosed with schizophrenia and was hospitalized in a psychiatric hospital for one month in 2008 and six-month periods in 2011, 2013 and 2015.

“When Kim left the hospital after his latest treatment,” said an officer from the Seocho District Police, “the doctor warned him that the disorder could recur if he didn’t take medication. The police can’t simply conclude something based on a statement that was made by a man with such severe mental illness.”