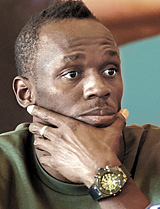 PRAGUE - Usain Bolt called it “really bad news” for the sport after the announcement that 31 athletes were caught doping in retests from the 2008 Beijing Olympics.

“It’s rough. It’s rough in the sport,” the Jamaican great said Wednesday. “Something that’s been tarnishing the sport for years.”

Bolt was speaking a day after the International Olympic Committee announced that the 31 athletes could be banned from competing at the Rio de Janeiro Games.

He said the World Anti-Doping Agency and others “are doing a very good job of cleaning up the sport. They’ve proven that anybody who has cheated, they’re going to catch.”

He said he believed that the crackdown on doping could prove successful.

“Hopefully, we can take steps forward in making the sport better and in the upcoming years we won’t have these problems,” Bolt said. “But, I think it’s a process, and I think over time we will get better because they’re doing such a good job.”

In track, Russia is banned from competing because of a WADA panel report detailing state-sponsored doping. The IAAF has yet to decide if the Russian track team will be allowed to compete in Rio.

“I don’t really think about it,” Bolt said. “For me, rules are rules. I really don’t make the rules, so, all I do is follow the rules. I can’t really do anything about it.”

In Europe, Bolt is only scheduled to race in the London Diamond League meet on July 22, two weeks before the Rio Games open.

“Definitely, for me, everything’s possible,” he said. “If I can continue on the right path until I get to the Olympics, I definitely think there can be world records. I really want to run sub 19, that’s my focus right now.”

Bolt acknowledged his career might be coming to an end but was still not there.

“I’m definitely at the final stretch for sure,” he said. “I think I’m coming to the end of the finish line but I can’t say how close I am. I’m just trying to close it out as best as possible.”