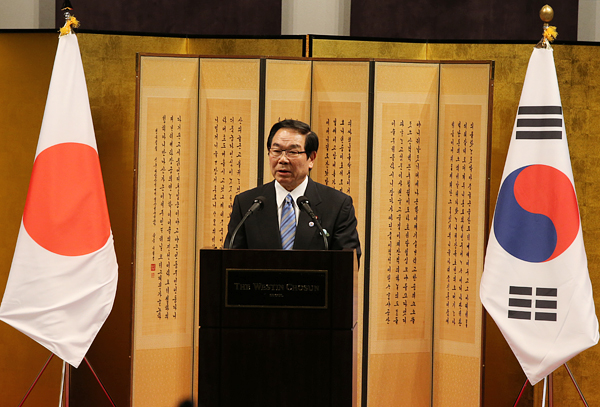 Henry Kissinger, the foreign policy architect of the Nixon and Ford administrations, had a hard time coordinating policy with Western Europe due to conflicts of interest among different nations. If Europe wants to talk to the United States, they can call the president, said Kissinger. “Who do I call if I want to call Europe?” he asked. Because there was no one authority representing Europe, it was hard to work with Europe. I thought about this famous remark as Japan experts exit politics and government after the April 13 election and the power of the National Assembly became divided.

Lately, Japanese politicians knowledgeable in Korean affairs are worried about diplomacy with Korea. On May 16, Japanese House of Representatives Speaker Tadamori Oshima hosted a banquet for Korean National Assembly Speaker Chung Ui-hwa and lawmakers visiting Japan to attend the Korea-Japan Parliamentary Talks for the Future. Chung said, “Former Chief Secretary Lee Byung-ki, Ambassador to Japan Yu Heung-su and lawmaker Kim Tae-hwan had been dealing with Japan, so Shin Yun-jo and I told the Japanese that it was regrettable they were no longer in charge.” Lee Byung-ki stepped down recently, and Ambassador Yu has tendered his resignation. Kim, acting president of the Korea-Japan Parliamentarians Union, failed to be reelected. Former diplomat Shim was not reelected, either. An attendee said that Parliamentarians Union president Fukushiro Nukaga and director Takeo Kawamura were especially worried. The two frequently talk with Kim over the phone. Nukaga Fukushiro is a faction leader in the Liberal Democratic Party, and Kawamura is close to Prime Minister Shinzo Abe, as they both come from Yamaguchi Prefecture. In the newly organized National Assembly, four-time lawmaker Kang Chang-il of the Minjoo Party, who received a Ph.D. from the University of Tokyo, and former Osaka consul Kim Seok-ki, a Saenuri Party member, are familiar with Japanese affairs. They are the only two members of the National Assembly who speak Japanese. So much has changed since 1978, when six of the eight Korean lawmakers did not need interpreters at the Korea-Japan Parliamentarians Union meeting.

However, in the Korea-Japan relationship, diplomacy among lawmakers should not be weakened. Japan is a parliamentary system, where lawmakers serve as the prime minister and cabinet members. The ruling party plays a major role in policy making. Exchanges with Japanese lawmakers are more important than in other countries. Language is a secondary issue. Parliamentary diplomacy continues to be strong on sensitive issues between the two countries. In the course of reaching an agreement on the comfort women issue, the Korea-Japan Parliamentarians Union served as a buffer. Lawmakers also minimize discords through unofficial compromise, seek cooperation and set new agenda. Joint responses to low birth rates and aging populations was one of the topics discussed at the Talks for the Future. All parties must work to rebuild a network with Japan.