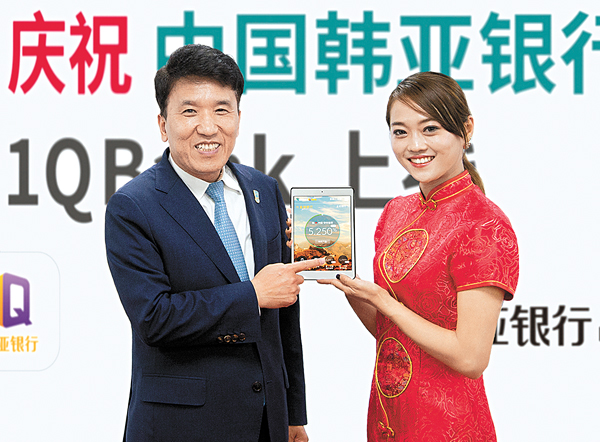 Korean banks are adjusting their marketing strategies in China to focus on fintech and mobile services.

While Korean companies operating in Beijing or Chinese companies trading in Seoul have been their traditional clients, their new main targets are regular individuals. They’re trying to grab market share in retail finance via the fast-growing mobile-based banking culture.

KEB Hana Bank launched its flagship app-based mobile 1Q Bank on Friday at its Chinese head office in Beijing, which enables customers to open bank accounts and perform other financial transactions without visiting a bricks-and-mortar branch. 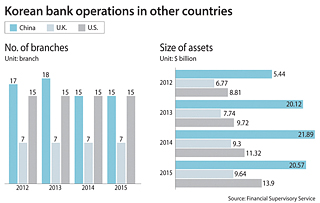 One of the earliest examples is a financial product package that features membership benefits on Korean medical tourism programs, which is slated to launch by end of this month. Tourists considering plastic surgery or other beauty-related medical procedures can get discounts on translations and medical fees with the 1Q Bank package.

“KEB Hana Bank will strengthen retail finance in China and maximize business synergies among branches across the world as part of our efforts to become one of the world’s 50 largest financial groups by 2025,” said the bank’s CEO Ham Young-joo.

NH Nonghyup Bank is currently working to obtain an Internet lending business in mainland China by the second half this year in collaboration with the state-run All-China Federation of Supply and Marketing Cooperatives.

Shinhan Bank is diversifying its businesses in Beijing.

“The Chinese market is one of Shinhan’s six core businesses as a key pillar to meet our goal of expanding overseas branches’ contribution to account for 20 percent of the total yearly net profit by 2020,” said a representative from Shinhan Bank. “We’re working to explore new business models, including obtaining more cash-cow assets in China and expanding non-interest incomes like foreign exchange transactions.”

To localize in China, Shinhan Bank elected a local official to be the head of the credit finance division at the bank’s Chinese affiliate in February. The changes follow slowing growth in China over the past three years, after first entering the market back in early 1990s.

Local commercial banks saw their net profit largely shrink from $105.7 million in 2014 to $22 million last year, according to the Financial Supervisory Service.

Analysts say the declining profit was largely because the Chinese government lowered the loan interest rate more sharply than interest on deposits. The continuing decline of loans borrowed from Korean companies in China is an added burden for Korean financial companies.

“While Korean banks are focusing their overseas expansion in China, their main clients which are Korean companies, have been cutting back on their investment in China and as a result the Korean financial companies are faced with limiting their existing sales strategy,” said Lee Chi-hoon, head of China’s research at the Korea Center for International Finance.

“It would be difficult for Korean banks to try to dominate the Chinese local retail banking with the same strategy employed in Korea as it falls behind in competitiveness against the Chinese banks even when comparing the number of branches,” Ji Man-soo, a researcher at the Korea Institute of Finance.

“Korean banks should find a new entry point by developing products and services that are different from the current strategy especially since Chinese banks are providing financial services that have incorporated a wide variety of fintech, including P2P loans.”