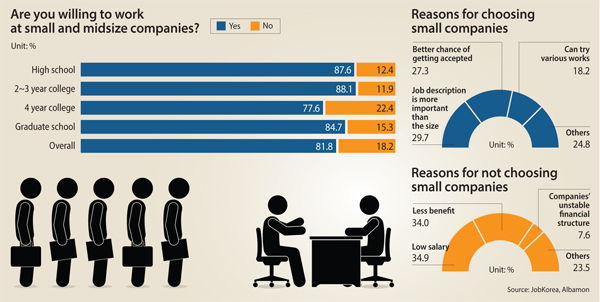 Eight out of 10 job seekers are willing to work for small and midsize companies, according to a survey released Monday.

JobKorea and Albamon, Korea’s major job information portals, surveyed a total of 1,305 job seekers, and found that 81.6 percent said they would be fine with working at a relatively small company.

Among those, 29.7 percent said the actual specifics of their work were more important than the size of the company. Twenty-seven percent said they would actually prefer a smaller company because they believe they would have a better chance of landing a job there than at a large company.

“It appears that young job seekers are lowering their standards since the labor market continues to be sluggish,” said JobKorea. “We also found out that female job seekers are more willing to work for small companies compared to their male counterparts.”

Eighty four percent of female survey participants said they would like to get a job at a small or midsize company, whereas that was the case for only 77.5 percent of male participants.

By education level, junior college graduates, or those who attended two- or three-year colleges, were most interested in getting jobs at small and midsize companies, while those who graduated from four-year colleges were least interested.

Among those who did not want to apply to small companies, some 35 percent said they are not willing to do so because of the low salary involved. Another 34 percent cited the fewer benefits they would expect to receive compared to a position at a larger company.

Meanwhile, each survey participant applied to an average 10.2 companies in the first half of this year and was able to interview at just 1.9.

According to data released earlier this month by Statistics Korea, the youth unemployment rate remained in the double digits for the third month in a row, sitting at 10.9 percent in April among job seekers aged 15 to 29.

“A total 39.5 percent of survey participants told us that this year’s recruiting process was a lot more competitive than the previous year’s and 19.8 percent said it was not much different from a year ago,” said JobKorea.

“Only 1.8 percent said this year’s process was easier than the last year’s.”