Not random at all

Not random at all 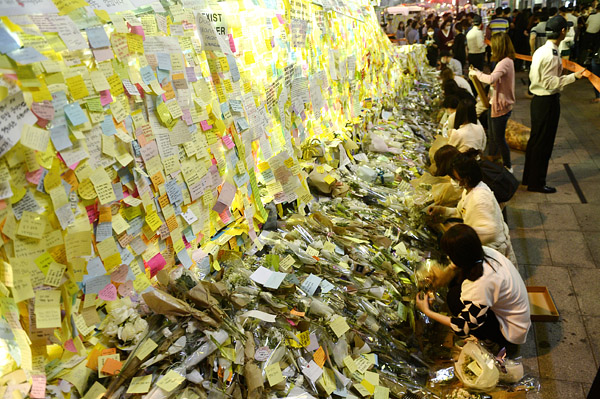 At Exit 10 of Gangnam Station Monday night, mourners leave Post-it notes for the 23-year-old woman who was stabbed to death by a stranger in a bathroom near Gangnam Station in Seoul. [OH SANG-MIN]

It’s best to be prudent when using terms like “profanity” or “turf war.” Calling rough or blunt words “profanities” can blur circumstances and contexts. When a turf war breaks out, there is almost always a complicated background. Using the turf war term without investigating which side is right may be convenient but won’t solve any problems.

“Random crime” is also a lazy construction. A random attacker targets victims without specific motivation or plan. When a crime is defined as “random,” the individual lives of the assailant and victim evaporate and the social context is eliminated. Was the murder of a young woman near Gangnam Station on May 17 really a random crime?

On Sunday, May 22, countless Post-it notes were posted at Exit 10 of Gangnam Station, an impromptu memorial spot for the murder victim. About ten men and women were discussing the case and not agreeing. “This is a place to remember the victim, not for gender discrimination,” said a man. “Would you say the same if you were murdered because of your gender?” riposted a woman.
In fact, dozens of people were debating the meaning of the case inside the police line.

“Men are not potential assailants. The case is being exaggerated.” “Is this not a hate crime against women? The murderer allowed six men to go by before he attacked the woman.” “The police said it was a random attack by a man with a mental disease. Both men and women are vulnerable when attacked with a weapon.” “Look at the crime statistics. Nine out of ten victims of violent crimes are women.”

A memorial service was being held in front of a bank 30-40 meters (32 to 43 yards) away. “This is not a way to mourn the victims. You are venting your inferiority complex,” a man said with raised voice.

Women came to the front and spoke through the microphone. “When we part with friends, we say, ‘Text me when you get home.’ If men don’t want to be treated like potential assailants, join our shout-out to the nation to make a safe society. Men may feel bad about this but it is a matter of life or death for women.”

“After my elementary school graduation, I entered an empty classroom and was dragged to the rest room and raped. When I went to college, I was told that I was not a victim but a survivor, and I feel proud to be alive. I hope every woman can live with confidence.”
“Some even joke that the victim was stabbed because she was not pretty. The media calls her ‘bathroom victim.’ Stop belittling women,” said a female participant. The service was temporarily stopped when several men were yelling and trying to get into the site.

At Exit 10 of Gangnam Station, I witnessed misogyny. Tens of thousands of Post-it notes appealed the anxiety of living as a woman, and so many women came out to admit their exposure to sexual assault and harassment. And yet some men came to the scene to insult and mock women. Misogyny is not just hatred and prejudice against women. It is also belittling, sexual objectification, discrimination, hostility and violence, Seoul National University professor Kim Su-a wrote in her 2015 thesis.

The murder suspect told police that women “attacked and harassed me” and “threw cigarette butts at me and made me late for work.” Because he has mental illness and his hostility is vague, should his crime be called a random attack? In any case, it does not change the social reality and context that women are vulnerable to violence. Men assault women on buses because they smell good. Women are belittled and sexually objectified online constantly.

Will changing the requirements for public restrooms improve the situation? Men and women in Korea need to work together to make a society equal and safe to both genders. Is it right to labeling the crime as “random” without addressing such concerns?