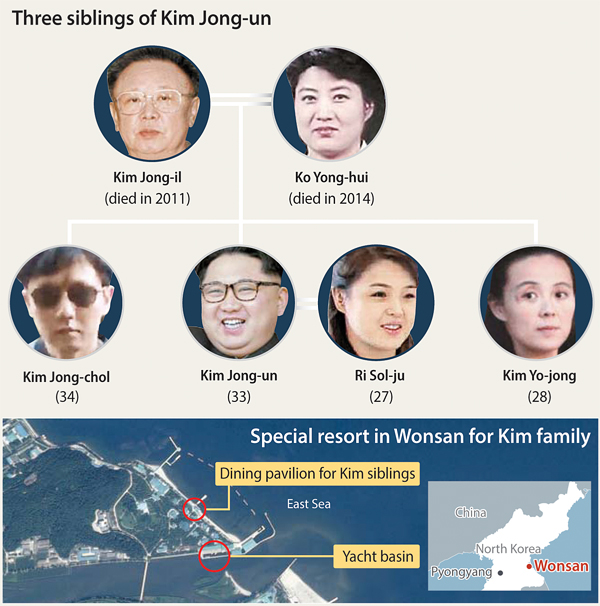 North Korea leader Kim Jong-un is having regular meetings with his older brother Jong-chol and younger sister Yo-jong, according to a source who specializes in North Korea, who could be developing into a new kind of inner circle.

According to the source, who spoke on the condition of anonymity, the three siblings gather at a special resort built for the Kim family in Wonsan, some 207 kilometers (128.6 miles) east of Pyongyang. The meetings are scheduled in conjunction with Jong-un’s visits to the area for time off or field inspections.

“As an inexperienced and unprepared Kim Jong-un took control of the county after his father Kim Jong-il’s sudden death in December 2011, he must have needed close communication with his family members to make up for his inexperience and a lack of trust toward senior party members,” said the source.

Kim, believed to be in his early 30s, must have worried about his grip after he had his uncle and protector Jang Song-thaek executed on charges of treason in late 2013.

Subsequently, Jang’s wife, Kim Kyong-hui, sister of Kim Jong-il, turned her back on him. The siblings may be filling a trust gap for Kim Jong-un.

Kim Jong-chol was once considered heir apparent, but he was eventually branded too weak or soft. His showing up at an Eric Clapton concert in Singapore in 2011 probably contributed to his father’s decision to pass him over and bequeath power to the younger Jong-un.

Jong-chol’s whereabouts and activities have been obscure since his brother took over in late 2011. The source said the older brother, who is now reportedly 34, must have felt the need to help Jong-un solidify his leadership.

Another diplomatic source said Jong-chol may have been in charge of the powerful Ministry of State Security.

“There was some speculation among Japanese delegates discussing the issue of North Korean abduction of Japanese at the North Korean Embassy in Beijing in July 2014 that Kim Jong-chol was pulling strings behind the scenes,” the source added.

Meanwhile, sister Kim Yo-jong is now nicknamed as a “pathway to power” by party officials, referring to her access to Kim Jong-un.

The Unification Ministry in Seoul confirmed that Kim the sister is now the highest ranked woman in the totalitarian state.

At the seventh congress of the Workers’ Party of Korea earlier this month, Yo-jong was elevated to the 129-member central committee of the party. It was a relatively young political debut.

Aunt Kim Kyong-hui, younger sister of Kim Jong-il, made her debut on the party’s central committee in 1988 at the age 42. Kim Yo-jong is reportedly only 28 years old.

Kim Jong-un is particularly fond of Wonsan because of its history with his mother Ko Yong-hui, who died in Paris of breast cancer in 2004 at the age of 52. Ko, who was born to parents of Korean descent in Osaka, moved to Pyongyang in early 1960s as part of a repatriation program. It was the port of Wonsan through which Ko entered the country as a young child.

For that reasons, Ko was once referred to as “Mrs. Wonsan” by people in the inner circle. Tuesday was the 12th anniversary of Ko’s death.